“Stop the war, do not believe the propaganda”, with these words the journalist Marina Ovsyannikova broke into a report on the Russian news broadcast on the national channel to protest against the war in Ukraine.

The woman, a First Channel journalist, interrupted the live broadcast of Vremya, the main Russian news broadcast in the country since 1994. During a report launched by her colleague Ekaterina Andreeva on relations with Belarus, Ovsyannikova, dressed in a dark dress and informal, she appeared behind her and exhibited the billboard. A few words but clear and incisive, an invitation not to believe the Kremlin’s propaganda.

The timely intervention of the director was of little use, who immediately broadcast a video to hide the protest because the frames of that irruption quickly made the round of the web. Marina Ovsyannikova has succeeded in her intent: to spread the message against the war.

Marina Ovsyannikova, who is the brave Russian journalist

But what do we know about the Russian heroine who challenged Putin with his blitz on the Russian news? Her name is Marina Ovsyannikova and she has been working as a journalist for Primo Canale for years. Through a video message recorded before the raid, and later published on Youtube, the woman condemned the actions of the Kremlin and this war.

Daughter of a Ukrainian father and a Russian mother, Marina Ovsyannikova defined this war as “fratricidal”, stressing that the two populations have never been enemies. She also admitted how, in recent years, she herself has in some way contributed to the spread of Russian propaganda lies by continuing to work for the First Channel.

“I am ashamed of having allowed lies to be spread on television,” confessed the former face of the news, declaring that the invasion by Russia is a real crime that must be stopped. So here is her action, her protest: Marina Ovsyannikova appeared behind her colleague showing a placard against the war and the actions of Russia.

“Stop the war. Don’t believe the propaganda. They are lying to you ”. A courageous gesture, that of the journalist, which however had consequences.

Marina Ovsyannikova, what happened to the woman?

When Marina Ovsyannikova chose to protest and denounce the crimes and propaganda of the Kremlin, she was probably aware of the consequences she would have to face, which is why she recorded a video message in advance which was then broadcast on the Youtube platform.

Yes, because in a country where any protest, even the most peaceful, ends with repression and arrests, as has happened in recent weeks, it is clear that even expressing one’s thoughts is considered a crime. And so it was for Marina.

According to the first information circulated after the raid, the journalist was arrested and immediately taken to the State Police Department. The network has expressed itself impartially stating that, following the facts, she is conducting an internal inspection of the incident.

For hours, in the meantime, the name of Marina Ovsyannikova has jumped from one social network to another and the journalist has become the symbol of repressed protest. Of her, however, after her arrest there is no more news of her. Ovd Info’s lawyers sounded the alarm. 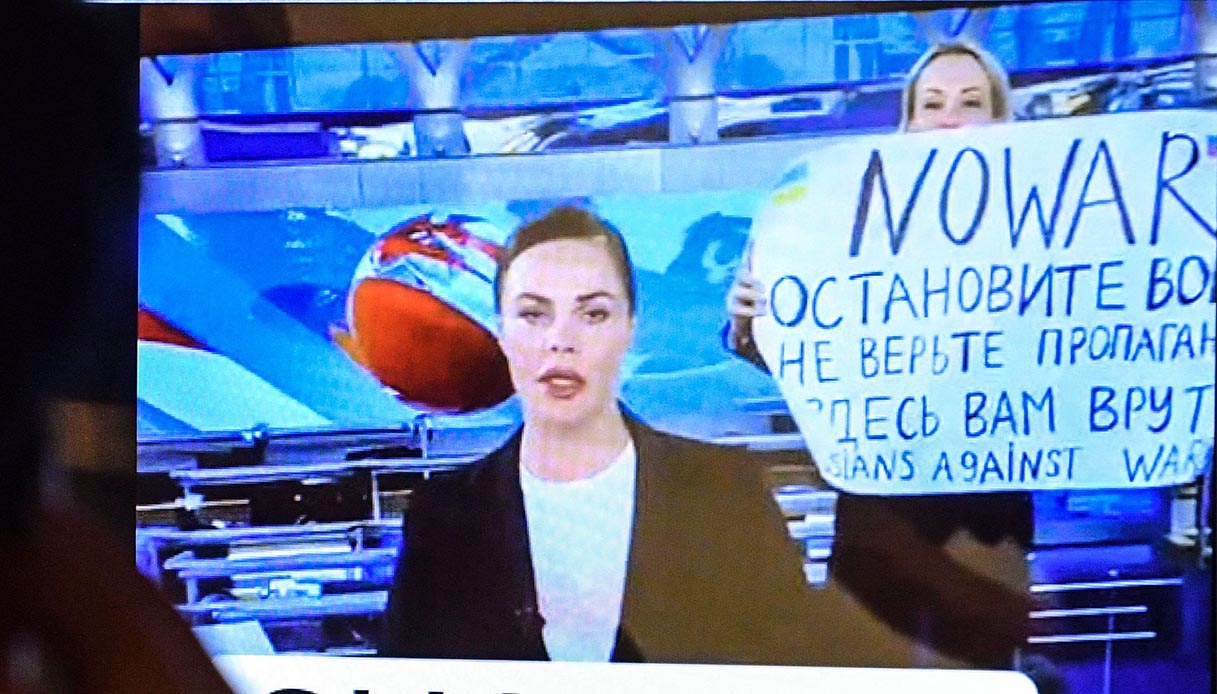