Oxygenated blond tuft, you will never recognize it

He promised that he will no longer dye his hair blonde, also because he is 50 years old today. Here he was very young 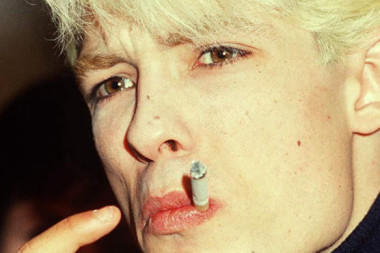 Son of art and sex symbol, his family album

If you were a girl at the end of the nineties you will remember that among your most transgressive male peers in that period it was fashionable to oxygenate your hair. And this guy you see in the picture was no different. It was the year 1998, he was no longer a boy because he was 33 years old but he showed many less. With a cigarette in his mouth and this bizarre hair he looked airy and damned, but his reality was just a clean little face.

Do you understand who he is? We give you another clue: he is a son of art. In fact, his father was an icon of Italian cinema. Exactly girls, let's talk about Alessandro Gassmann (we interviewed him, read here), son of the great Vittorio. Alessandro turned 50 in February 2015 and publicly thanked him for the good wishes, posting a photo similar to the one we show you. The comment was “Thanks again for the great affection !!! I promise that for the next 50 years I will no longer get this color … maybe ”. We liked it that way too, but deep down Gassmann is one of those men who are like wine: the older we get, the more they gain value. And today as yesterday it remains an Italian sex symbol.

The certainty of a life after ours, of a paradise, is certainly better than the certainty of nothing. (Alessandro Gassmann interviewed by Tipsforwomens)

Browse the gallery that we have dedicated to him, where you can browse among the family photos that portray him as a child together with his father Vittorio and mother Juliette Meynier, a young man together with Pieraccioni, Rita Rusic, Gianmarco Tognazzi and a rising Raoul Bova. And if you want to see it in the cinema, we remind you that in recent weeks it is in theaters with the film Se Dio Vuole.