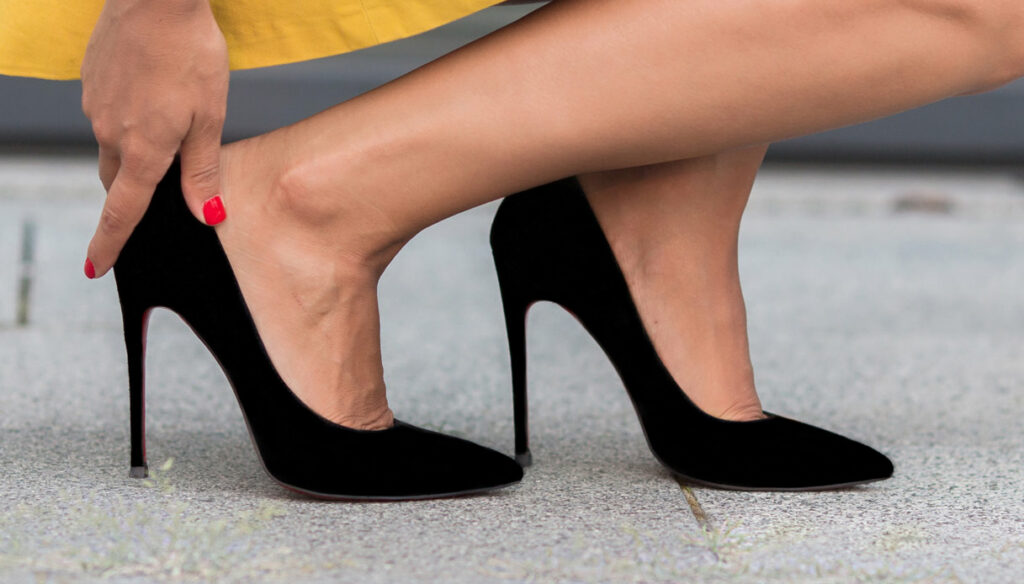 Orthopedists always recommend it. For those at risk of hallux valgus, it is better to wear comfortable shoes and in any case not tight at the toe.

Now to clarify how the choice of shoes for those who are sensitive to the problem should be done more in terms of comfort than fashion comes a research from the University of Cambridge, which appeared in the International Journal of Paleopathology, which points the finger (this is the case of say it) precisely on the advent of narrow-toed shoes in the medieval period to explain the spread of this condition. In short: the relationship between what covers our feet and the hallux valgus appears really close.

Hallux valgus tends to manifest itself almost always during adulthood and, contrary to what many think, it is not just an unwelcome and indispensable genetic inheritance. Although it is now certain that there is a certain family tendency to "pass on" the disorder, especially among women, it is equally undeniable that the most significant cause of the disease must also be sought in the use of unsuitable footwear.

In particular, it is known that narrow shoes favor the development of hallux valgus, even if the foot was, at least originally, perfectly healthy. The phenomenon develops over the years: at first, also due to the efforts, the big toe joint begins to swell, giving way to painful infections that end with the production of small growths destined over time to turn into small "spikes" calcified, similar to bone.

These are the cause of joint enlargement, severe pain and unsightly deviation of the big toe, which can lead to further deviation of the other fingers as well as causing pain. In short, the shoes are under accusation. And the English research, conducted on almost 180 skeletons of the cemeteries of Cambridge and its surroundings, seems to confirm their influence.

In fact, scientists have shown, by studying the bones of the foot and then looking for the protuberance typical of hallux valgus, that the disease was more widespread in the richest areas.

Not only that: the change in footwear fashion has impacted on the frequency of the problem. if between 1000 and 1200 the finding of hallux valgus was substantially limited, more or less in 6% of the total, between 1300 and 1400, i.e. in the Middle Ages, the percentage jumped upwards, reaching 27 %.

How to explain this phenomenon? According to experts, attention must be paid to the changes in "fashions": around the fourteenth century, in fact, especially in the wealthiest people, shoes went from rounded toe to long and pointed toe. In short: we are talking about the classic "poulaines" shoes which, in some way, would have accentuated the protuberance of the base of the big toe and the pain, in particular among clergy and nobles.

Hallux valgus is a deformity acquired on a congenital predisposition with deviation towards the outside of the first toe. In practice, the big toe tends to "derail", as if it were a train that goes crazy and strays from the tracks, until it is crooked and overlaps even over the two neighboring fingers.

This happens because above the first metatarsal the two ossicles that have the task of always keeping the head of the big toe in place (.), Are unable to perform their task. Up to here the anatomical damage, to which unfortunately is added the inflammation caused by the shoes, especially if they are narrow at the tip.

Focusing on prevention, especially if there are cases in the family, is very important. In addition to choosing the right shoes, you can also have advantages from the use of special insoles or orthopedic shoes that aim to avoid the excessive load moved to the front of the foot and therefore the overwork that tires the joint.

Physiotherapy treatments can also be useful, but when the pain becomes really difficult to bear and even discomfort occurs in the ankles and knees that can be correlated with the presence of hallux valgus, the word can also pass to the surgeon. Any intervention should be chosen on a case-by-case basis, given that there are different techniques and considering that not all of them derive the maximum benefits from the operation.