Pokè bowl: what it is, benefits and how it is composed 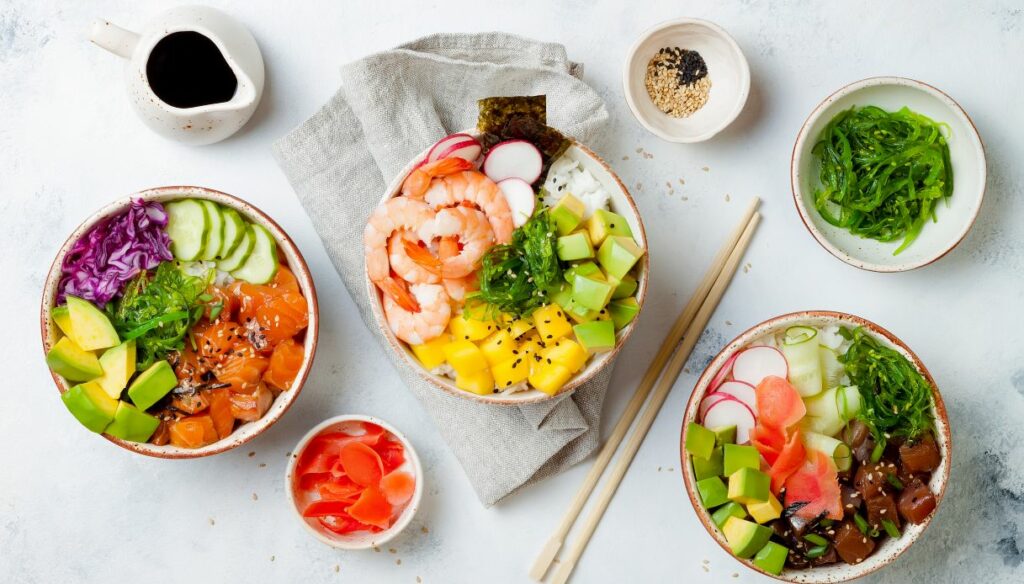 The pokè bowl is a balanced, healthy and tasty dish based on rice, raw fish and vegetables, to buy ready-made or to prepare at home

The pokè bowl or poke is a single dish of Hawaiian origins based on rice and raw fish now widespread all over the world and lately very fashionable also in our country. Born as a poor dish to dispose of the leftovers of the fish, it is actually a complete and tasty dish, which can be customized according to your tastes and needs. The original poké recipes are based on rice and fish: in particular, the Aku poke contains rice and tuna, while the He’e poke is composed of rice and octopus. Numerous variations have developed from these two initial recipes but the composition remains more or less the same. The pokè is in fact always prepared with a third of carbohydrates – generally rice or quinoa – a third of proteins which, in most cases, is represented by raw fish, and a third of vegetables. Tradition provides that in pokè the fish is cut into cubes: poke means “to cut into pieces”. In the vegetarian or vegan version, the fish is replaced with tofu or edamame, the unripe soybeans. The original recipe then involves marinating the ingredients so that they flavor, while the modern variants are seasoned on the spot with olive or sesame oil, soy sauce or other sauces and garnished with seeds, crunchy onions or other toppings. The poké is then served in a bowl – the bowl – generally round, large and made of natural materials such as coconut.

The pokè bowl, if prepared with well-balanced quality ingredients, is a healthy and balanced dish that can be enjoyed by everyone. The poké recipe in fact provides that the dish is composed of carbohydrates, proteins and vegetables, therefore it is a dish capable of providing the body with all the macro and micro nutrients it needs. The source of carbohydrates most used to prepare pokè is rice, therefore a gluten-free and easily digestible cereal, generally chosen in varieties with a low glycemic index.

Fish, in addition to providing noble proteins, provides essential fatty acids that help reduce inflammation and fight cholesterol while vegetables are a source of fiber useful for intestinal well-being and vitamins and minerals essential for the proper functioning of our body.

If you do not overdo the quantities and do not add caloric sauces, the pokè is a single dish also suitable for those who are following a low-calorie diet with the aim of losing weight: a small pokè bowl, seasoned only with a spoonful of oil and a tablespoon of soy sauce, in fact, provides about 300-400 calories. It is different if the pokè is seasoned with teriaki sauce, sriracha, tonkatsu or other sauces which, in addition to containing salt, are rich in sugar, an ingredient that certainly increases the amount of calories and the glycemic index of the dish.

How it is composed

The poké bowl can be purchased in the pokery or prepared at home. In takeaways, ready-made poké are offered with selected ingredients, but many pokeries expect to be able to compose their own poké according to their tastes. To compose the pokè bowl, as we have seen, it is necessary to choose a source of carbohydrates, one of proteins and one of vegetables and then decide on the type of seasoning. Takeaways often give you the possibility to choose more than one protein source, but it is preferable to limit yourself to just one.

As for the source of carbohydrates, in pokè white basmati or jasmine rice is generally used, very aromatic qualities of rice with a long and firm grain. To prepare the rice for the poké, pour the rice into a saucepan, cover it with water, add a pinch of salt and bring to a boil over very low heat by placing a lid on the saucepan. The amount of water to be added should be two to three times the weight of the rice. The rice is then left to cook over low heat until it has absorbed all the water. In addition to white rice, brown rice, black rice (Venere rice), barley, quinoa or other grains can also be used to compose the pokè, to be cooked in the same way.

Once you have chosen the carbohydrate source, you move on to the protein source. As a rule, the pokè is prepared with raw fish cut into pieces, usually salmon or tuna, which must be absolutely fresh and chilled if you do not want to take risks for your health. There are also variations: the pokè can in fact also be made with cooked fish such as octopus, salmon, prawns, surimi. There are also poké prepared with beef or chicken, always cut into cubes or thin strips. In the vegetarian and vegan versions, the protein source can be boiled egg, tempeh, seitan, diced tofu, edamame, chickpeas.

One or more vegetables are then added to the poké to complete the last third of the recipe. Cabbage, red cabbage, zucchini and tomatoes are perfect to give the right flavor to poké, but also fennel and orange, cucumbers, carrots, to which add some olives, onions, jalapenho or wakame seaweed and possibly fruit such as pineapple, avocado or mango.

Finally, seasonings and toppings are chosen, without exaggerating in quantity. The dressing can be simple olive or sesame oil but also soy sauce, mango, sesame, wasabi sauce, teryaki, sriracha, tonkatsu or mayonnaise. Among the toppings you can opt for a level teaspoon of dried fruit in grains (pistachio, hazelnut, peanut or almond), sesame seeds, crunchy onion or marinated ginger, according to your taste. The ingredients are arranged in order in a round and large bowl and the poké is ready to be enjoyed.