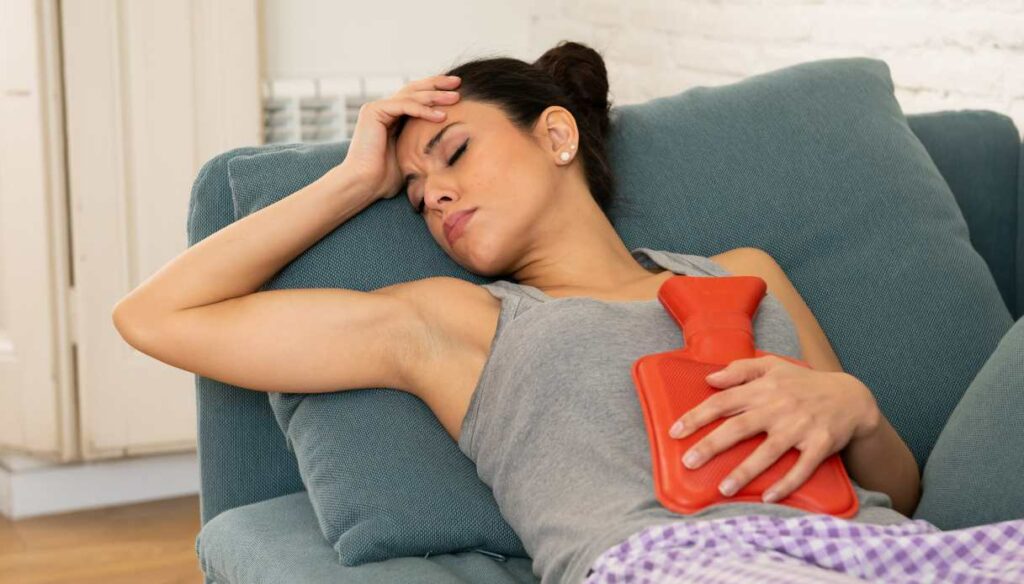 Irritability, mood disorders, pain and water retention: typical symptoms of PMS. Here are the natural remedies to combat them

The most frequent symptoms

Premenstrual syndrome or PMS includes a series of symptoms that can occur seven to ten days before the arrival of menstruation, continuing even for two or three days after the onset of the period. Most women of childbearing age experience disturbances during this period, which coincides with the luteal phase of the menstrual cycle. In this phase, in fact, endocrine changes occur which lead to changes in hormonal levels and hypoglycemia. During the luteal phase there are fluctuations in progesterone, estradiol, prolactin, melatonin, which lead to the onset of various psychological and somatic symptoms.

In particular, women with PMS may feel hungrier than usual before menstruation or in the first few days of their period, feel tired, nervous and irritable. Mood disorders can also occur during PMS, with agitation, anxiety and mild depression. PMS can then cause breast tension and pain, abdominal swelling and pain, and water retention. Before the period, back pain, headache and muscle pain may also appear or worsen, also due to the increase in circulating prostaglandins.

The intensity of PMS symptoms is highly variable because each woman responds differently to hormonal changes and, moreover, they can also change from month to month. Often these are minor complaints; when the symptoms are moderate or severe, relief can also be found thanks to natural remedies.

Natural remedies to counteract the symptoms of menopause can have anti-inflammatory action useful in relieving pain, diuretic to combat water retention or they can act by regulating hormone levels or, again, improving mood. Below is a list of the most used plants and natural extracts: these remedies can be combined with vitamin and mineral supplements, in particular vitamin E, B vitamins and magnesium.

The chaste tree (Vitex agnuscastus) is the ripe fruit of a small shrub also known as false pepper. This remedy contains flavonoids, iridoid glycosides and alkaloids and is used to reduce prolactin levels, reducing the symptoms of PMS. It is taken from the week before the date on which the cycle is expected to arrive, in the form of dry or liquid extract.

Ginkgo biloba leaves are mainly used to promote blood circulation and protect brain health, but are also used in the treatment of PMS. In particular, ginkgo can help reduce tension and pain in the breasts, typical symptoms of the arrival of your period.

The phytoestrogens present in soybeans and red clover are best known for their use in the treatment of menopausal disorders, but are also useful for women suffering from PMS, particularly for reducing breast tension and swelling.

The oil extracted from the seeds of Oenothera biennis, a plant known as "night beauty" is rich in essential fatty acids of the omega-6 series, with anti-inflammatory action. It is taken as a supplement of 2 to 4 grams per day with meals and is useful for reducing breast and muscle pain, as well as preventing the appearance of boils before the period. Other oils rich in omega 6 are oil extracted from black currant seeds and borage oil.

Lavender is a plant rich in properties that also helps in case of PMS. Taken in herbal tea, in fact, it helps to relieve agitation and anxiety and to reduce uterine spasms, which cause pain during the first days of the cycle. The essential oil is also useful in case of back pain, abdominal and muscle pain: it is sufficient to disperse three drops in a vegetable oil (olive, sunflower or sweet almond) to massage the areas to be treated, in particular the belly.

The chamomile flower heads, as well as the flowering tops of lavender, can provide relief in case of abdominal pain caused by contractions of the uterus, improve mood and reduce anxiety, agitation and irritability. They can be taken in herbal tea several times a day, leaving the flowers to infuse for about three minutes in a cup of hot water.

The root and leaves of the dandelion, a spontaneous plant also known as "dandelion", "dog piss" and "dandelion", have a diuretic action useful in counteracting the swelling caused by the accumulation of fluids in the period preceding menstruation. It is taken in the form of herbal tea, even several times a day, to promote diuresis. In spring it is also possible to collect the dandelion leaves and use them in the kitchen: after having blanched them in boiling water, they can be sautéed in a pan or combined with the ingredients to prepare omelettes and savory pies.