Push ups: what they are for, muscles involved and execution of the exercise 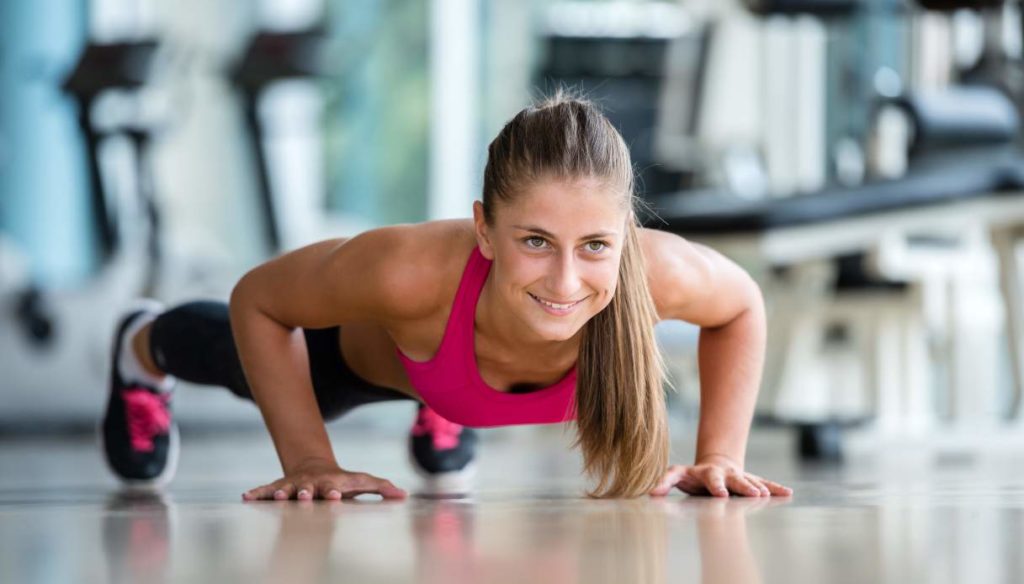 Pushups are among the most complete and varied exercises: what are the benefits, which muscles are activated and how to do them well

What are they for

A great classic of bodyweight training, push ups are essential for those who want to achieve a toned and harmonious physical shape, especially in the torso and upper limbs, but not only. They are erroneously called push-ups, but the correct Italian term is push-ups on the arms, because the torso and legs remain stationary in a horizontal position while only the arms, in fact, bend. We start on the plank, with feet and hands on the ground, torso and legs on one line and arms extended. Breathing in, bend your elbows and go down parallel to the ground but without leaning with your chest, belly or legs, and exhaling you return to the plank, pushing with your arms (push means to push).

They are one of the most complete exercises to create power in the upper limbs and pectorals and, depending on the variants, also to increase muscle mass. Because keeping the body in a horizontal line from the feet to the head seems easy, but it requires a lot of mindfulness and attention to activate not only the muscles of the arms or shoulders, but also a lot of the abdominals and, yes, the thigh muscles.

Which muscles are involved with this exercise

Push ups involve many muscles, some more markedly, others secondary. The ones that tone up the most are:

The muscles that are involved in a secondary way, in stabilizing the body in a straight position, are:

The execution of a perfect push up

To perform a push up well, you need to know the right technique. The hands rest on the ground with the fingers very wide and placing the weight also at the base of the fingers, on the metacarpus, so as not to tire the wrist joint. The arms are initially straight, as is the whole body straight, from head to heels, raised off the ground and in a horizontal position. The feet are placed on the toes and are slightly apart.

Breathing in, you have to bend only your elbows and go down with your body parallel to the ground without touching and exhaling with a push you return with your arms extended. All this for as many repetitions as possible.

Mistakes not to make

Pay attention to the position of the elbow: it is crucial in correct execution and when it is incorrect it can lead to unexpected injuries. When they open outwards, it makes less effort and the pectorals train more, so many tend to go in this position, but risking hurting the shoulder (in particular the rotator cuff) or causing bad muscle contractures. behind the neck. The elbow should be placed further back than the shoulder, not necessarily close to the torso, but in that direction. So the push up will be harder, yes, but safer and more effective.

Attention also to the lumbar area, which must maintain its curve, without the pelvis going too far upwards or, on the contrary, falling towards the ground, causing the straight position of the whole body to be lost: the muscles of the abdomen, of the back and the glutes must work to stabilize the body, and protect it from back injuries.

Same goes for the neck: the gaze must be held between the hands, one does not look forward, one does not look back. The curve of the spinal column in the cervical tract must remain as when we are in an upright position, in order not to cause potentially dangerous overloads.

Very often in women's training, except in the cases of the most performing athletes and in certain sports, pushups are not contemplated. For this reason the muscles of the arms, chest and female abs are less strong and the classic push-up is very difficult the first few times you try to perform it. However, starting gradually, women can also achieve perfect push-ups.

Better then to start with a simpler variant, also valid for beginner men, which is performed keeping the knees on the ground, which decreases the leverage of the legs and makes the movement less tiring and more controllable.

The most famous variants

Depending on the muscles you want to strengthen, there are many variations of pushups. We list some of them, the most used in the gym:

Instead of having your hands shoulder-width apart, they are positioned wider, so as to engage the pectoral muscles more. Much loved by men.

It is performed by bringing the tips of the fingers together until the index fingers and thumbs touch, so that the space between these fingers will draw a diamond shape. Bend the elbows until they lower with the chest over the diamond and exhale back up. The elbows must be close enough to the torso, so the exercise focuses its effectiveness on the triceps.

Doing the push up by lifting the feet or hands is a good way to modulate the intensity of the movement. If you lift your feet on a bench, for example, or on a lower level, you increase the difficulty. Instead, raising your hands on the bench, or even the wall, reduces fatigue, so it's a good way to strengthen yourself and then get to the classic push-ups.

Advanced variant of the classic push up, in which the torso is moved to the right before bending only the right elbow while the left arm remains stretched and the left hand rotates 90 degrees outwards and then extends the right arm and it is done on the left side. In this case the hands are wider than in the classic fold, while the feet are together. Without touching the ground with the belly it is for supermen and I am a preparation for the push up on one arm.

The one-arm push-up is that of Rocky Balboa: feet wider than the classic push-up, one arm behind the back and down on one arm. It takes a lot of strength and all the load is on one wrist, so be careful to reinforce this joint as well.

The most spectacular and exhibitionist among the push ups are those in which when you exhale you give an explosive push with your hands on the ground, lifting yourself up so much that you can clap your hands in front of your chest before placing them back on the ground and doing another push-up.

Maria Teolis
2923 posts
Previous Post
Today is another day: live clash between Vittoria Schisano and Serena Bortone
Next Post
Pendulous fibroids: what they are, causes and how to eliminate them