Rice: nutritional values, types, calories and how to include it in the diet 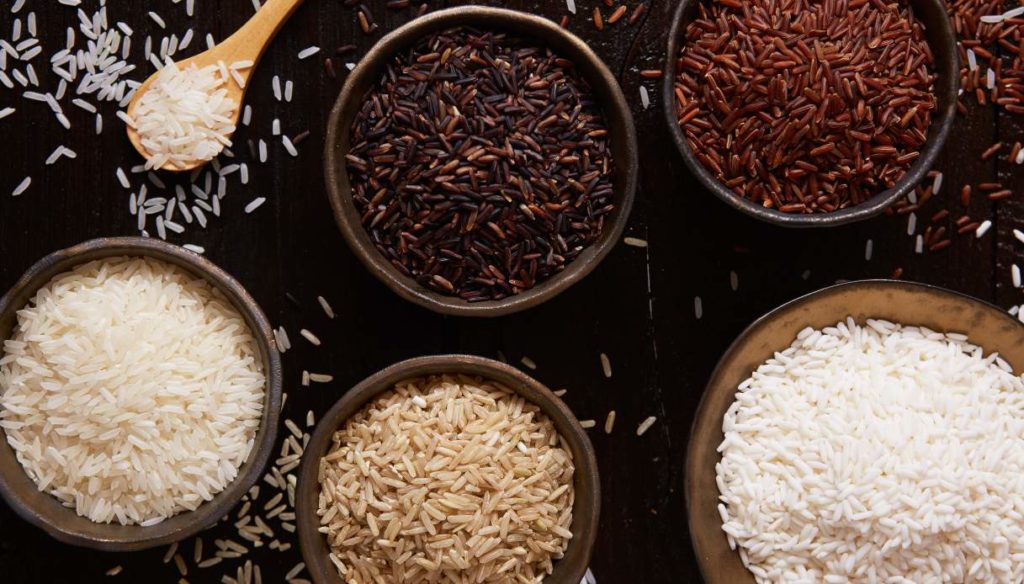 Rice is a versatile food suitable for everyone: let's discover the varieties, nutritional values ​​and use of this cereal in the kitchen

Rice is a cereal originating from Asia, grown for food in hot and humid areas around the world for a few thousand years. Even today, rice represents the staple food of a large part of the world population, in particular for the Asian ones of China, Japan and India and its world production is about 500 million tons per year. The most cultivated species is Oryza sativa, of which there are several subspecies including the japonica, native to China and characterized by rounded grains, the indica, which includes basmati rice and patna, both with long and narrow vitreous kernels and iavanica, grown exclusively in Indonesia.

In Italy, rice is grown mainly in the Po Valley, in particular in the provinces of Pavia, Vercelli, Novara and Milan, where there are over 220 thousand hectares of rice fields. Cultivation takes place in submerged soils, which reduce the temperature range thanks to the ability of the water to store heat during the day and then release it during the night.

The sowing of rice takes place in spring and the crop is treated with herbicides to keep weeds under control, an operation that in the past was carried out manually by the mondine used in husking. Harvesting takes place at the end of October thanks to the use of combine harvesters, after the rice fields have been dried up. The product obtained is called paddy or raw rice and must undergo various processes before becoming edible.

First of all it is cleaned to remove earth, stones and other foreign materials. Subsequently the grains are subjected to husking to eliminate glumes and glumellae and thus obtain brown rice. The beans can then be processed to remove pericarp, germ and other tissues through a process known as bleaching, which can be followed by treatments with talc and glucose (polishing) or with odor-free and taste-free oils (oiling), to obtain shiny beans. Throughout the manufacturing process, the grains that are discarded because they are broken, damaged or of unsuitable size, are recovered to obtain semolina and rice flour.

Puffed rice is also obtained from the rice, by rapid evaporation of the water inside the grains, and sake, an alcoholic drink obtained by fermentation.

A serving of rice corresponds to 80 grams and provides about 270 calories from 62 grams of carbohydrates, 6 of proteins and 1.5 of fat. Rice also contains mineral salts, in particular potassium, calcium, phosphorus and iron, and B vitamins (niacin, thiamin and riboflavin). Rice is naturally free of cholesterol and gluten and has a low glycemic index. Compared to polished rice, wholemeal rice has a better nutritional profile and is richer in both vitamins and minerals and fiber, which are important for the well-being of the intestine.

Rice varieties in Italy are classified by law into four groups, characterized by different grain sizes and different resistance to cooking: common, semi-fine, fine and superfine. It is a purely aesthetic and physical characterization since all varieties, regardless of organoleptic qualities, have the same nutritional values. Despite this, fine and super fine rice are considered more valuable and sold at higher prices.

Common rice is characterized by small, round grains, less than 5.5 millimeters long, which cook in 12-13 minutes. The Originario, Balilla, Rubino and Cripto varieties belong to this category, the latter being considered the most valuable.

It has tapered or semi-tapered grains, more than 6.5 mm long and cooks in 14-16 minutes. The varieties Ribe, Europa, Ringo, Romanico, Radon, Rizzoto, Sant’Andrea and Vialone nano fall into this category.

Brown rice, which includes Venere rice or black rice, has a better nutritional profile than bleached and polished rice, but has long cooking times and is not very resistant to cooking. Parboiled rice represents a good compromise between brown rice and non-brown rice. It is a rice subjected to a hydrothermal treatment, thanks to which the water-soluble compounds present in the germ and in the outermost parts of the grain, such as the B vitamins and iron, migrate towards the center of the caryopsis. At the same time, a partial gelatinization of the starch takes place. To obtain parboiled rice, the grains are left macerated in water, steamed, dried and dried and then dehulled and bleached. The treatment gives parboiled rice a nutritional profile similar to that of brown rice but speeds up cooking and improves conservation and resistance.

How to include it in the diet

Rice is a versatile food, easily digestible and suitable for everyone. It can be included in the weekly diet, one or more times a week, and consumed in various recipes. After washing the rice grains, they can be cooked in water equal to double the volume, placing them in cold water and letting them cook over low heat with the lid on without stirring until all the water is absorbed. Once cooked, the rice can be seasoned with oil and salt, flavored with garlic, spices and aromatic herbs, used to accompany vegetable and legume dishes or to prepare cold rice salads. Rice can also be used to make soups, soups and meatballs, in addition to the famous paella and the classic risotto that can be prepared in many variations, from yellow saffron risotto to classic risotto with mushrooms, asparagus or leeks, up to the more particular ones with orange or strawberries. Sweet and savory recipes can also be prepared with rice flour.

Maria Teolis
3382 posts
Previous Post
Who is Christiane Filangieri, Irene in the fiction Mina Settembre
Next Post
Miriam Leone changes her look: on Instagram she teaches us how to wear bangs