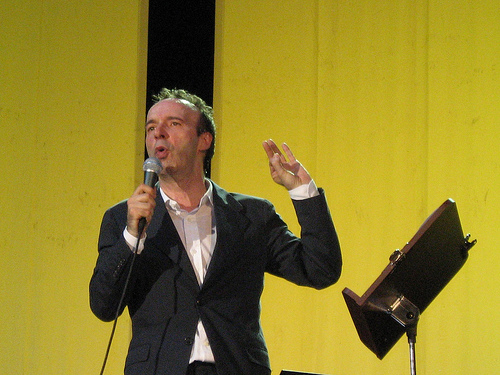 Roberto Benigni is one of the most popular and appreciated public figures in Italy and in the world. Let's find out more about the professional and private life of this actor

Roberto Benigni was born on 27 October 1952 in Castiglion Fiorentino, a small town in the province of Arezzo, to a peasant family. He graduated in accounting, but his passion for the show takes over, starting first as a singer and musician and then continuing as a theater actor. Roberto Benigni's professional turning point came in 1975, when he met the famous director and screenwriter Giuseppe Bertolucci. This makes him debut first on television, as presenter of the Rai Due satirical program "Onda Libera", and then at the cinema, in the film "Berlinguer I love you". In 1983, during a rally of the PCI, the scene of Benigni that literally takes the communist leader Enrico Berlinguer, one of the most serious politicians of the Italian political landscape of the time, goes down in history. In 1980, together with Claudio Cecchetto and Olimpia Carlisi, he leads the 30th Sanremo Festival. In 1983 he brought the cabaret show "Tuttobenigni" to the squares and theaters throughout Italy, thus proving to be a perfect one-man show. In the same year he made his debut behind the camera as a director, with the comedy "Tu mi turbi". The following year, he boxed the box office with the film "We just have to cry", shot together with his friend Massimo Troisi.

In the second half of the 1980s, Roberto Benigni landed in the United States of America, where he starred in four films, including "The Son of the Pink Panther", a famous film where he played the role of Inspector Clouseau's son. In 1991 he founded, together with his wife Nicoletta Braschi, the production company "Melampo Cinematografica". In the 1990s, three of the Tuscan actor's greatest cinematographic hits were released: The Little Devil, Johnny Stecchino, The Monster. All comic films, but which deal with burning issues related to the events of the period, such as the mafia massacres and the macabre crimes of the Monster of Florence. The international consecration came in 1997 with "La vita è bella", a film that tells the horrors of the holocaust with a different approach from all the other films of the genre, tackling such a delicate topic also through irony, alternating drama and of comedy. The film has won many prizes and awards worldwide, including nine David di Donatello awards, five Silver Ribbons, a BAFTA, a SAG Awards and three Oscar Awards (best soundtrack, best foreign film, best leading actor). The story of Benigni's award for best leading actor by Sophia Loren on Oscar night went down in history.

In 2002 Roberto aims to make an encore of successes with "Pinocchio", a faithful cinematographic reproduction of the novel by Carlo Collodi. Unfortunately, however, the most expensive film in the history of Italian cinema proves to be an authentic world flop, even being included in the list of the worst films of the 2000s. We try again in 2005 with "The Tiger and the Snow", but also this film is rejected by national and international critics. So he decided to abandon cinema for a while to return to the theater, where he devoted himself to reading the songs of the Divine Comedy. The show, initially proposed in Piazza Santa Croce in Florence, was a huge success, so much so that it was then brought around Italy and was also broadcast on television by Rai Uno. In 2009, the "Tutto Dante" tour became worldwide, being represented around Europe, the United States of America, Canada and South America. The return to film acting takes place in 2012, in Woody Allen's comedy "To Rome with love". In the same year, on Rai Uno, he conducted "The most beautiful in the world", a variety that aims to explain the twelve fundamental principles of the Italian Constitution with simplicity. At the end of 2014 he is still on TV with a show focused on the ten commandments.

At the moment Roberto Benigni is busy writing the subject of his new film, eleven years after his last work as director and screenwriter. The Tuscan actor is full of admirers and detractors, given that his films, his television appearances and his monologues on hot topics have often divided critics and audiences. As a singer he has released eight music albums, as a film actor he has starred in twenty-eight films and has directed eight films. In 2003 Benigni received the Gold Medal for the merits of culture and art and in 2005 he was awarded the title of Grand Cross Knight of the Order to the merit of the Italian Republic by the then President of the Republic Carlo Azeglio Ciampi. In 2007 he was nominated for the Nobel Prize for literature for his commitment to spreading the Divine Comedy. A large number of Honorary Degrees were also awarded to him by the main Italian universities. In private life he has been married since 1991 to the actress Nicoletta Braschi, known on the set of the first film he directed "Tu mi turbi". So here is who Roberto Benigni is, one of the most famous and appreciated Italian actors in the world.