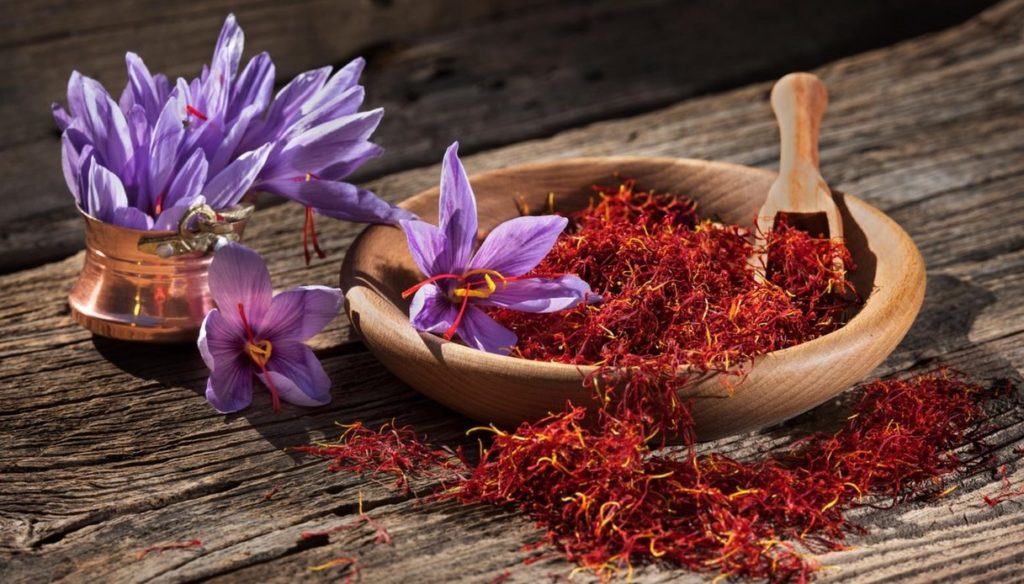 Saffron is a precious spice, so much so that it is called the golden spice: a gram can cost as much as 30 euros

Crocus sativus is the plant from which saffron is obtained, the plant from which the 3 stigmas are hand-picked and dried. In the Middle Ages, saffron as well as a spice was used as a herbal remedy for its virtues. The name "saffron" is of Arab origin and refers to the botanical name of its plant.

The largest production of saffron is Iranian, in Italy it is concentrated in some regions including Sardinia, Tuscany, Abruzzo, Marche and Umbria. The Crocus is a perennial plant that blooms in autumn, the flower has the typical mauve color that distinguishes it as the saffron flower, the flowering lasts very little, the crocus in fact withers quickly. Harvesting must be done quickly, early in the morning before the flower opens completely. It grows in well-irrigated clayey-calcareous soils even if it fears excessive humidity. It also prefers direct sun and unfortunately it is a popular prey for wild animals, such as rabbits, hares, mice and birds that feed on bulbs. Once picked by hand, the stigmas are dried in various ways: in rooms at a constant temperature, in the sun, or in electric ovens. The color of the stigmas must be a bright red that releases an intense aroma.

Let's talk about numbers? These data might impress us, but they make us understand why the cost of saffron is so high. For the production of one kg of saffron in threads, approximately 100,000 flowers are needed, which corresponds to approximately 25,000 bulbs. Such a number of bulbs need an area of ​​about 1000 square meters. 10 milligrams of fresh saffron correspond to 7 mg of the dry one.

Saffron is classified according to the international standard ISO 3632 which sets three categories: III of the lowest quality, II and I of the highest. The contents of crocin and picrocrocin present in the spice are evaluated, detected by the absorbance capacity for analysis by spectrophotometry in certified laboratories.

100 grams of saffron contains 310 kcal, 65 g of carbohydrates, 11 g of protein, 6 g of fat, vitamin C, A, B6 and folate. Saffron is a source of mineral salts such as manganese, magnesium, iron, potassium, phosphorus, copper and calcium, even if, commensurate with the dosage of the spice, their content is almost negligible.

Saffron contains important phytonutrients such as carotenoids, crocetin and crocin, which give the characteristic intense color. The flavor is attributed to picocrocin and safranal, the latter is formed by the drying of the former. The presence of these carotenoids and terpenes are indicative for identifying some phytotherapeutic properties of this spice. In fact, it seems that saffron has effective implications in the treatment of mood disorders. Crocin appears to be effective in the treatment of depressive disorders, carrying out an action similar to fluoxetine, an anti-depressant.

Crocin and crocetin have also been studied in the oncology field. In fact, it seems that they can induce apoptosis in some cancer cells and carry out protective activity on DNA, RNA and proteins thanks to the antioxidant action of these carotenoids. These are in vitro studies, there is a lack of insights into humans and the effects of the phytocomplex. Research is also underway on the effects of saffron carotenoids on premenstrual syndrome and their action on the disturbances caused, such as insomnia, restlessness, mood swings, spasms.

The dosage makes the difference! If consumed in excessive quantities it can cause undesirable effects such as nausea, vomiting, headache. A consumption of more than 15 grams could even be lethal. The administration for therapeutic use is always at a low dose: around 15-30 mg per day if for prolonged periods, 200-500 mg in case of premenstrual syndrome for short periods of time. Taking saffron supplements for a long time at a dosage higher than 60 mg can cause mood disorders, drop in blood pressure, reduction of red blood cells, white blood cells and platelets.

The origins of saffron are thought to date back to around 3000 BC. on the island of Crete, where crocus sativus was obtained from wild specimens. The spice was much appreciated by the populations of the Mediterranean basin where the various commercial traffic between the Egyptians, Romans, Greeks and Phoenicians took place. With the fall of the Roman Empire, the cultivation of saffron came to a halt, but with the passage of the Arabs it was reintroduced in Europe starting from 1200 AD. It is thought that in the East, saffron has its beginnings around 1500 BC. It also arrives in the new world, in America thanks to the settlers of northern Europe, enjoying enormous success until the early 1800s, only to be gradually forgotten.

Maria Teolis
2967 posts
Previous Post
Farewell to William Link, creator of Columbus and The Lady in Yellow
Next Post
Today is another day, Alberto Matano confesses to Mara Venier