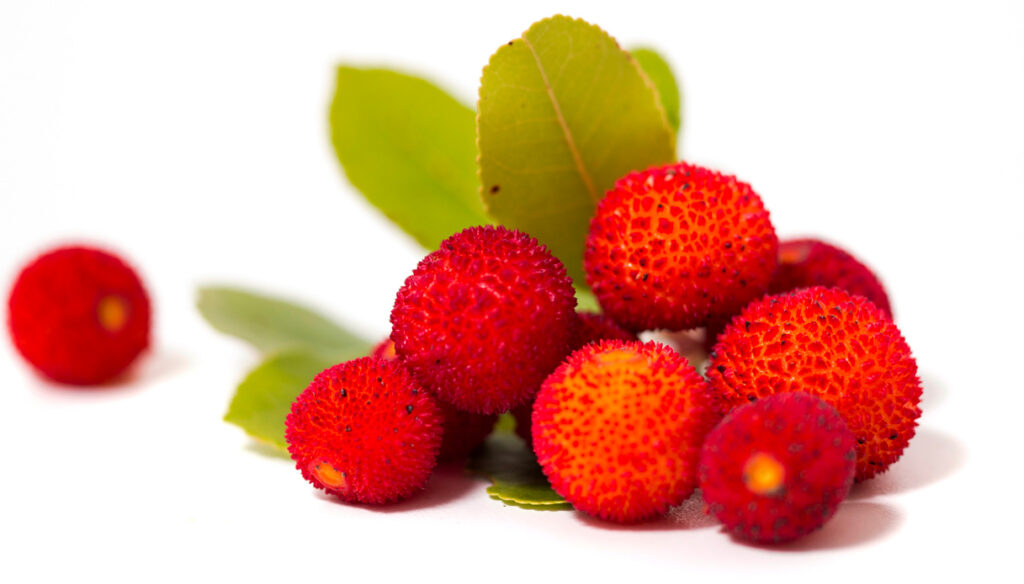 The strawberry tree boasts numerous properties for health. Recent research speculates that its honey may be used against colon cancer.

Also known as the “Tree of Italy”, since in the Risorgimento the simultaneous presence of leaves, flowers and fruits (green, white and red) inspired the choice of colors for the national flag, the strawberry tree in the past was considered a magical plant, typically solstitial and counted among the “devil-chasing herbs” to be collected on the night of San Giovanni. Its branches were in fact placed above the doors of houses and stables to protect them from witches, evil spirits and werewolves (for the same reason dried leaves were placed under the pillow of babies).

Its fruits are made up of red or orange berries, with a rounded and wrinkled shape due to the presence of numerous conical tubercles, and have a fleshy consistency, with soft, grainy and yellow pulp. Trees grow spontaneously in thickets, in dry woods (especially holm oaks), in rocky and stony places. In Italy, the strawberry tree is present above all in the southern regions, due to the milder climate, but it is also encountered in the Center-North, where it can also be successfully cultivated.

The fruits, which are the edible part of the plant, contain:

Fruits often not present in our tables, they are appreciated for their innumerable properties for health, especially in the herbal field, carrying out antioxidant, astringent, diuretic, anti-inflammatory, renal antiseptic and emmenagogue actions (favoring menstrual flow). The decoction of the leaves, in particular, is used as an antirheumatic and disinfectant of the urogenital tract.

But it is in honey that the strawberry tree plant gives its best. The honey obtained, in fact, in addition to having a particular taste, characterized by an initial sweet note followed by a bitter component, has balsamic, antispasmodic, antiseptic and diuretic properties. It has recently been speculated that this extraordinary product of nature may also represent an effective weapon against colon cancer. This was said by researchers from the Polytechnic University of Marche, together with those from the universities of Vigo and Granada, who saw in the laboratory that colon cancer cells, when this honey is added to them, stop growing and spreading. According to the research, published in the Journal of Functional Foods, “treatment with this honey blocks the cycle of cancer cells by regulating certain genes, inhibits cell migration, reduces their ability to form colonies and induces their programmed death,” he said. commented Maurizio Battino, coordinator of the study. However, new studies, in live models, will be needed to confirm the preventive chemo effect of this honey.

The berries can be eaten fresh, plain, alone or added to fruit salads. But don’t overdo it, as excessive consumption can cause a sense of intoxication or slight stomach pains.

Much more often the fruits of the strawberry tree are used in the preparation of jams, jellies, sauces, syrups and desserts.

Getting an strawberry tree jam is quite simple: first, you need to wash the berries gently and let them simmer for about 15 minutes. At this point, it is necessary to pass them through a sieve to remove the seeds, and pour the puree obtained into a saucepan, to which sugar (about 650 g per 1 kg of strawberry trees) and the grated peel of 1 lemon must be added, being careful not to insert the white part. Cook slowly, over low heat, stirring until the mixture becomes thick.

From their boiling we also obtain a kind of must used to package some traditional confectionery specialties or they can be preserved in alcohol with the addition of sugar, as is done with cherries.

They are also eaten candied and with their distillate they prepare traditional alcoholic drinks. The “wine of Corbezzolo”, a typical specialty of Corsica and Sardinia, generally has an alcohol content ranging from 5 ° to 10 ° and its taste, particularly pleasant, is reminiscent of that of cider.