Stretch marks and daily diet: is there a link? 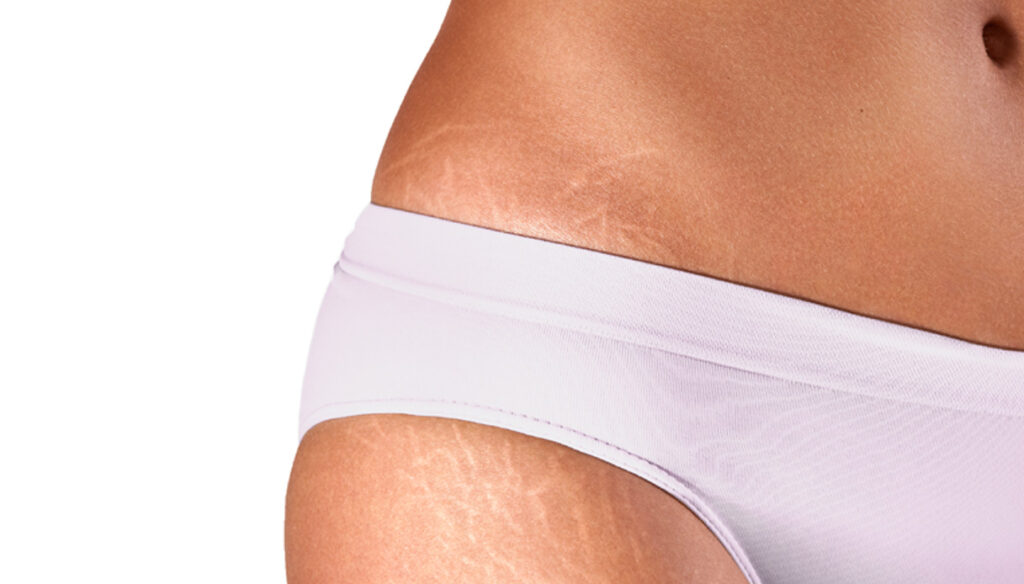 What are the causes of the most widespread skin disease in the world, the truth about the link with food and the treatments to successfully erase them

In less than a century, stretch marks have gone from absolute rarity to an almost physiological state of the developmental period, capable of universally affecting young girls and boys. The age in which it is easiest to form, in fact, is in the teenage years, when the body grows and changes quickly and, subsequently, in young adults in the event of sudden weight changes and pregnancy.

In adolescent girls and women, the anatomical areas most commonly involved are the thighs, buttocks, and breasts. A skin disease that can have a negative and lasting psychological and emotional impact, experts say.

Stretch mark is the consequence of a skin alteration in which many factors are combined, among which, of course, there is a glucose and hormonal disorder. As the American scholar Cushing taught, hormonal alterations attack the collagen present in the skin of certain areas of the body, making it unstable and in many cases breaking it down. If then these hormonal disorders are combined with moments in which the body is in the extension or lengthening phase, such as in the period of development for boys and girls, perhaps also combined with weight gain, such as during pregnancy and breastfeeding , the risk of the onset of striae is very high.

The link with food

From a strictly scientific point of view, therefore, it is incorrect to state that there is a correlation between diet and the onset of stretch marks. "This is not a consequence of the fact that there are no strong correlations, but it is simply due to the fact that no one has ever developed a study in this sense", points out Maurizio Busoni, researcher, tutor of university studies in the field of aesthetic medicine, teacher in university masters of i and ii level of aesthetic medicine in Italy and Spain.

"From an 'epidemiological' point of view, however, there are strong parallels between three aspects: the so-called 'junk food', packaged food and stretch marks", continues the expert. "If we look at Western countries, we see that overweight, cellulite and stretch marks have grown in parallel with the spread of 'junk food' and preserved food. For example, in Europe in the first half of the 20th century, stretch marks were still a rarity; if we look at the photographic archives of Fratelli Alinari we will be able to find black and white photos and daguerreotypes of hundreds of female nudes where not even a streak appears ”.

"Stretch marks began to be present after the economic boom of the 1960s with the gradual change in nutrition, which until then was essentially zero kilometer. With the emergence of the food industries in Europe too, it has begun to supply semi-finished and ready-to-eat foods, in any case with the addition of preservatives, additives and dyes, which over time have been progressively limited by scientific research, which has shown in some cases the harmfulness ".

"The big leap – says Busoni – stretch marks do it towards the 80s, when they begin to present themselves in an almost systematic way with pregnancy (about 80%), or in the same period in which the spending of Italians changes radically, no longer in neighborhood shops but in supermarkets, where packaged food is preferred. Today we are besieged by fast-food, hamburgers and carbonated and sugary drinks, and now the streaks affect everyone, boys and girls, already from puberty, representing the most widespread skin disease in the world ".

Yes: the most widespread in the world. “Because in Asia – he continues – what happened in Europe in 60 years has happened in less than 30. At the end of the 20th century, Asians ate their food from local and extensive productions and no one had stretch marks. Today the industrialized areas of Asia have the same incidence of stretch marks as Westerners and precisely in these areas food has also been 'westernized', with Korean, Chinese and Japanese companies that have invaded the packaged food market and are stealing space. to zero kilometer food, in parallel with the same phenomenon linked to the growth of fast-food ”.

If it is true, therefore, that there is no scientific proof that diet can cause stretch marks, there are, however, aspects that indicate the onset of skin disease with the economic boom and changes in the daily diet.

The good news is that today – as explained in the book "Stretch marks – The state of the art" (OM Edizoni), a volume created with the aim of sharing serious information and supported by scientific publications with the general public and with all the people who probably they are affected by these alterations and suffer from them – it is possible to treat them successfully in 80-90% of cases.

The text, created by prof. Domenico Amuso and written in collaboration with doctors, teachers and researchers who in recent years have specialized in the study and treatment of stretch marks, often contributing to prestigious publications, also focuses on therapeutic proposals: in particular, there is a completely Made in Italy procedure capable of restructuring the stria, filling it progressively, with permanent results and without side effects.

A new horizon for those who want to say goodbye to striae.

Maria Teolis
3085 posts
Previous Post
Skirt and flat shoes in spring: how to combine them with style
Next Post
Friends 2021, Martina in tears after the farewell: Aka7even does not say hello