Sabrina Paravicini, on Instagram, told the breast removal operation she had to undergo and moved everyone

Sabrina Paravicini, the actress who played Jessica in Un Medico in Famiglia, is facing the battle against breast cancer and has decided to make her fans participate to help those who, like her, are experiencing the same war.

A tough battle, which Sabrina Paravicini has never hidden. A cancer that forced her to have chemotherapy and an operation for total breast removal. Particularly difficult moments to face, but which the actress shared with those who, with affection and tenderness, followed her on Instagram, showing all the effects that chemotherapy was having on her body.

After breast removal, Sabrina Paravicini did not change her habits and showed herself, as always, at the same time fragile and strong on social media, telling in detail what is happening. Despite the disappearance of the tumor, the doctors intervened, leaving two wounds under the armpit and a horizontal wound in the center of the breast, to prevent a relapse from occurring in the future.

The words of the actress, however, reveal not only suffering, but also strength, hope and gratitude:

I was not prepared for so much physical pain. For me it was hard, very hard. Pain just to breathe. The solitude of the nights when you come to terms with the threshold of endurance of physical pain and with patience. The memory of the pain is attenuated thinking of the nurses who looked after me, of the surgeon who came every morning to see how I was, of the model who was checking my wound, of the specialist who explained to me what would happen, of my roommates, my sweetest discrete and loving, one becomes a sister in a few minutes. Everything is shared, even thoughts without saying anything. Help us. Even at night if you cry. Maria Luce, a 39-pound wren with a bladder tumor and a drainage on the liver, got up from the bed and gave me a leg massage saying, "Everything will be fine, Sabri."

At home, Sabrina Paravicini has found the support of her loved ones and, in particular, of little Nino, the actress's son. Still through Instagram, Sabrina gave her fans soft excerpts of daily life:

Nino brought me a bell and said "I'm at your disposal, it sounds like you're in a hotel". The first night he cooked me some fantastic baked potatoes. He did it all by himself while my mom watched him from afar. They were delicious.

Nino, we are sure, will pamper his mother in this delicate moment. We, like all her fans, are close to her in this battle and wish her well soon. 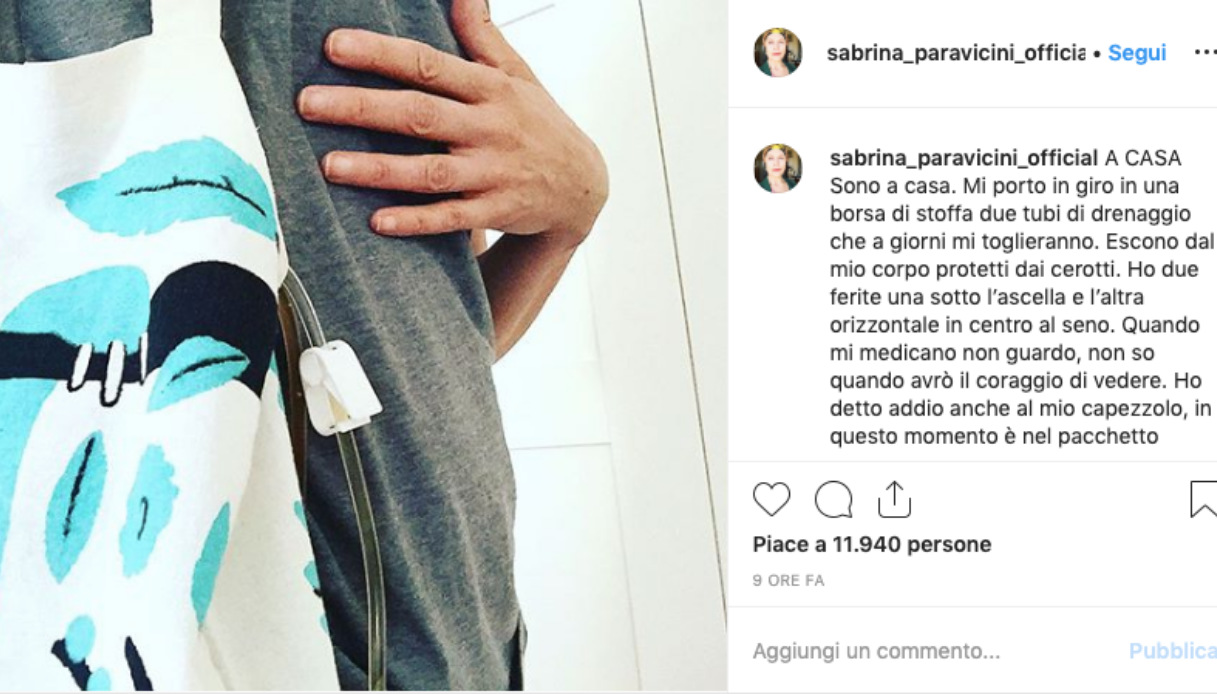