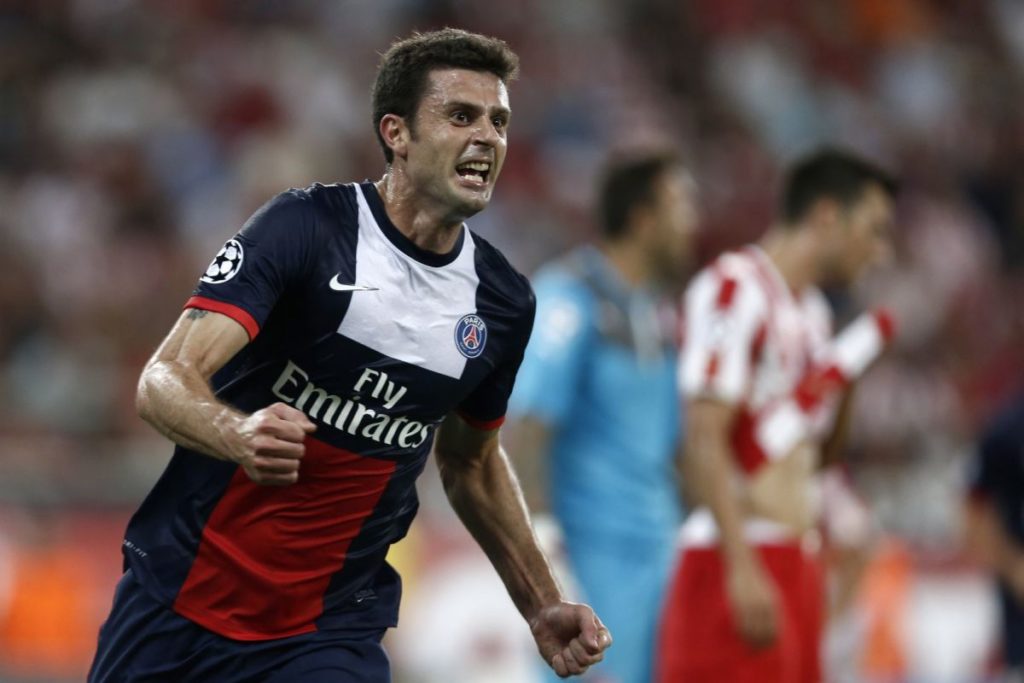 Thiago Motta is one of the top players of Paris Saint-Germain and the Italian national football team. We retrace the professional career of this player

Thiago Motta was born on August 28, 1982 in São Bernardo do Campo, Brazil. He began his football career in the youth clubs of Clube Atlético Juventus, a Brazilian soccer team from the city of São Paulo. In 1999 he was noticed by Barcelona who hired him and played his first three seasons with team B. His debut in an official match with the first team took place on 3 October 2001 and after this game he became a pillar of the Blaugrana midfield. With Barcelona he won two Spanish championships, two Spanish Super Cups and the 2006 Champions League.

In 2007 Thiago Motta moved to Atlético Madrid, but a serious meniscus injury caused him to miss the entire championship, thus being released from the Madrid club at the end of the season. So he passes to Genoa and his performances return to leave their mark as in the time of Barcelona. After just one season in rossoblu he is bought by Inter. With the Nerazzurri shirt he wins a Scudetto, the 2010 Champions League, a Club World Cup, two Italian Cups and an Italian Super Cup.

After three seasons in Milan, in January 2012 he was purchased by Paris Saint-Germain, where he still plays. With the French team he has won four championships, four French Super Cups, three French League Cups and two French Cups. Despite being born in Brazil, Thiago Motta has Italian citizenship by descent, as his great-grandfather was from the province of Rovigo and at the beginning of the last century he left for South America in search of fortune. The Italian passport allowed him to play with the Italian national team.

He made his debut with Italy on 9 February 2011, at 28, against Germany. He participated in the 2012 European Championship, the 2014 World Cup and the recent French European in which he wore the number 10 shirt, creating many controversies for this decision taken by the Technical Commissioner Antonio Conte. Thiago Motta is a skilful midfielder both in defense and in attack. In his private life he has been married for a few years to a Brazilian girl, Francisca. The couple leads an extremely reserved life, far from the spotlight and worldly life.