Things to know about Amal Alamuddin's clothes, including a wedding dress 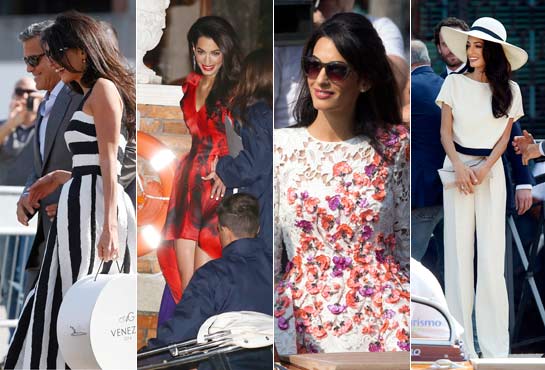 Amal Alamuddin summarizes, with magnificent elegance, the image of a modern, cultured, intelligent woman, aware of roles and attentive to choices regarding outfits. The lawyer of Lebanese origin has succeeded where others have failed miserably and in a relatively short time, considering that in less than a year the two have decided, planned and organized their marriage in the inimitable setting offered by the romantic scenarios of Venice. He married her, George, simply because he loves her.

And she returns. Both have given us a magnificent event that brought us back to the glories of a worldly Venice, now unpublished, to a sweet Hollywood life that does not reconcile even with the civil commitment of the spouses who in this circumstance wanted to offer their guests a 'unforgettable experience.

An evaluation of the solemnity of the event that did not prevail in the choice of the other, wonderful, outfits admired in this long Venetian weekend. Starting with the long design by Dolce and Gabbana paired with black raffia sandals, slightly vintage sunglasses and dangling earrings at his landing in Venice.

An enchantment, like the dress worn by the bride for the evening of the bachelorette party, which Alexander McQueen has chosen, the same one who dressed Kate Middleton making this wedding dress as an iconic model of absolute tendency, on a par of the veil.

For the lawyer, who even boasts a special relationship with former UN secretary general Kofi Annan, a romantic lace bared shoulders and a veil edged with the same embroidery to wrap it. A bride less lavish than we would have imagined, but of undeniable beauty in her Oscar de la Renta.

Disarming smile, taxi ride through the canals (we are also fond of their "Love") with sister, mother and friends, all very refined.

But the most powerful dress, which for us deserves the recognition of the best garment seen on the Alamuddin, remains the macramé with applied flowers by Giambattista Valli. Superlative, even if it perhaps highlights the excessive thinness of the bride.

Finally, to consider, future brides, the ceremonial outfit for the civil ceremony, the signatures in short, signed by Stella McCartney: wide trousers and cream top with black contrasting band, clutch and matching shoes of the same designer and giant hat – the real highlight – as it was for Bianca Jagger. An innovative, current, clean outfit with undoubted sartorial quality. Choices as an authentic style icon.