Vegetable oils: what they are, what they contain and how they are used in the kitchen 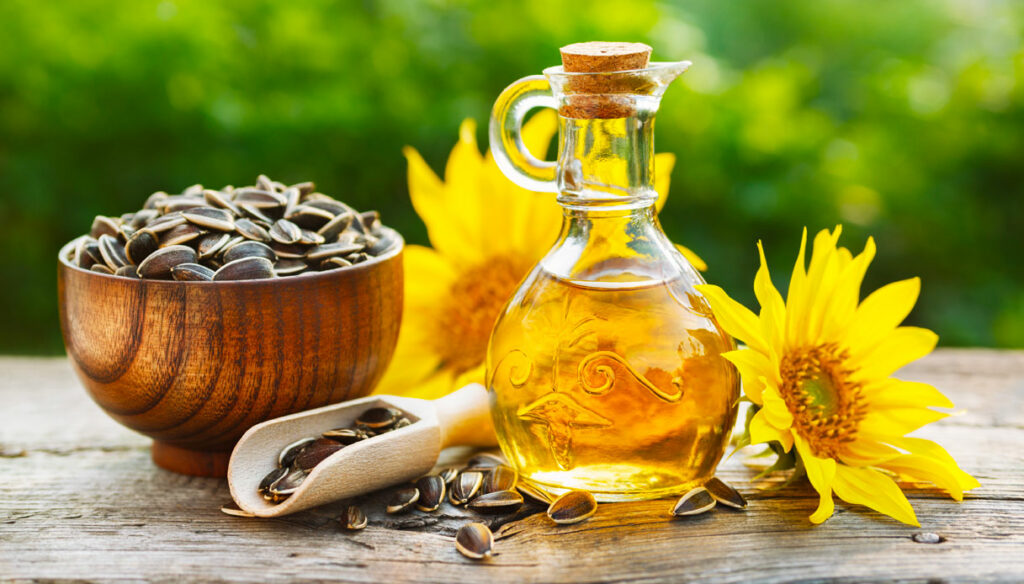 Sunflower, peanut or soy? Let's find out the organoleptic properties and how to choose them

Vegetable oils are obtained from the fruits or seeds of plants. They are mainly extracted with solvents which are then eliminated with the refining process. The main source of vegetable oils is represented by oil seeds, however some are obtained exclusively from the pulp of the fruits: this is the case of palm oil as well as, of course, olive oil.

Vegetable oils have a very varied composition, but their common characteristic is that they do not contain cholesterol. Seed oils are generally rich in polyunsaturated omega-6 types and also contain non-negligible quantities of omega-3s, substances that are very effective in decreasing the level of LDL in the blood. Like extra virgin olive oil, they are a source of fat-soluble vitamins (especially vitamin E) in highly variable quantities, but compared to the former they generally contain less saturated and less monounsaturated fats.

The main vegetable oils used in the food sector

The most loved by Italians, among seed oils. According to data from Assitol, the National Association of the Oil Industry, in 2015 its consumption exceeded 200 million liters due to the good quality / price ratio. Sunflower oil is rich in polyunsaturated fatty acids (50%); monounsaturates account for 33%. In particular, it is very rich in linoleic acid, a polyunsaturated fatty acid. Recently, high oleic sunflower oil has been commercially available, which has an oleic acid content of about 80% obtained from new sunflower seed cultivars. It also contains minerals and vitamin E, therefore it is considered an antioxidant and the American Heart Association, the association of American cardiologists, indicates it among the most effective oils for the prevention of cholesterol.

Perfect for frying. It is rich in monounsaturated (52%) and polyunsaturated (28%) fatty acids and oleic acid (50%) and is therefore similar to olive oil. Stable at high temperatures, it is suitable for frying.

It has a composition similar to that of sunflower oil (polyunsaturated 50% and monounsaturated 30%) also rich in linoleic acid.

The "brother" of olive oil. It is extracted from rapeseed and is, among vegetable oils, the one that comes closest to olive oil in terms of oleic acid content. The production of this oil has greatly improved over the years because varieties have been selected that contain low amounts of erucic acid, a fatty acid that is harmful to health, if present in large quantities.

Ideal for sweets. It is extracted from the concentrated pulp of the coconut fruit and is composed almost exclusively of saturated fatty acids (87%) consisting of the three fatty acids (lauric, myristic and palmitic). Of these, most (50%) is lauric acid, which is among the three the saturated fat with the least effect on increasing blood cholesterol. It is used only as an ingredient in pastry.

Industrial use. Palm oil is extracted from the drupe of the oil palm fruit and also contains a fair amount of oleic acid. It contains about 50% of saturated fatty acids, consisting of the three fatty acids (lauric, myristic and palmitic). It is very stable at high temperatures. Thanks to the high saturation, the fact that it is a tasteless oil and the low production cost, it is suitable for industrial use.

It has a composition similar to coconut oil, with a very high percentage of saturates (more than 80%) consisting of the three fatty acids (lauric, myristic and palmitic). Among them, most of it consists of lauric acid which is the saturated fat with the least effect on the increase of blood cholesterol. Very stable at high temperatures, tasteless and low cost, which is why, like palm oil, it is suitable for industrial use.

It is extracted from the grain of rice. It contains about 40% of monounsaturated and 40% polyunsaturated fatty acids. It is an oil with a high content of oleic acid and linoleic acid. The gamma oryzanol contained in rice oil has had some advertising popularity as a modulator of cholesterolemia. The effective quantities of this compound, explain the authors of the Guidelines for healthy eating (rev. 2018), would lead to a very high intake of rice oil and therefore with a caloric impact far more important than the effect on cholesterol.

They are extracted from the seeds of walnuts, hazelnuts or almonds and the respective oils used for food purposes are products linked to small artisan businesses or to particular gastronomy. They are rich in polyunsaturated fatty acids among which the quantity of omega-3 and omega-6 are important. The quantity of oleic acid is also discreet.

Finally, various seed oil is obtained by mixing oils from various types of seeds, such as peanuts, sunflowers, corn, etc.

Maria Teolis
3044 posts
Previous Post
GF Vip, Rosalinda in tears for Dayane: "I've always justified it"
Next Post
Find out if the vaccine on you works