What happened to Vittorio Cecchi Gori 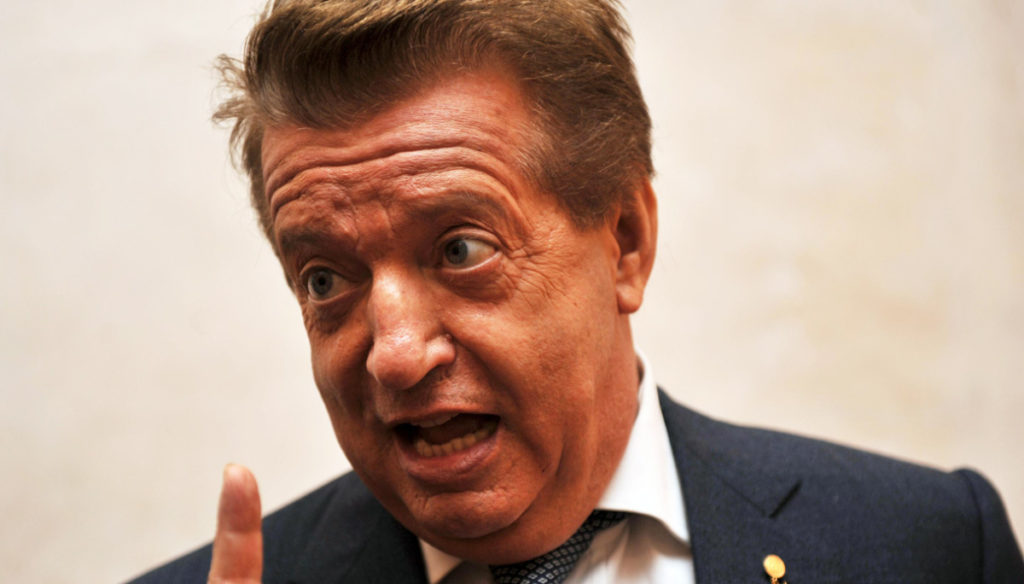 Vittorio Cecchi Gori's ex-wife spoke about his health. Struck by ischemia in late December, he is still in hospital: "He will have lost at least 20-25 kg"

Vittorio Cecchi Gori has been hospitalized since the end of December because he is suffering from ischemia. Ex-wife Rita Rusic talked about his health during the broadcast of Rai 1, La vita in vivo.

Vittorio is stable and constantly improving. He is very thin, he will have lost at least 20-25 kg. Yesterday I cut his hair.

Rusic said that the ex-husband is alone, everyone forgot about him because he no longer has anything.

Now there is nobody around Vittorio because there is nothing more to take, what had to be taken has been taken everything. Vittorio has nothing left. Have we seen statements from people? But they never saw it, they never came to see it.

He also described the journey made with his son to run to the bedside of Cecchi Gori, immediately after hearing the news of the illness:

We were afraid to land and find some news that was even worse than what we had received, especially when you have a black out of a flight that lasts at least 9-10 hours. We ran from the airport and went there. It was horrible – he continues – the feeling was that of finding a man who had been abandoned, not by us, because he abandoned us, but by everything and everyone.

Some time ago Vittorio Cecchi Gori told Storie Italiane, Eleonora Daniele's program, that he was alone and sad. The sons Vittoria and Mario are far away, in America, where they live with mother Rita Rusic. Her parents are gone. And there is no woman at his side: "There is no longer anyone – he says – to tell the truth, I was alone. I have always had a great life, but the representation that the newspapers give to show that one flutters here and there is not true, and suddenly this year, after so many years, I am feeling a little sadness and I would like to be with someone to be comfortable with ».

Looking back he thinks about his career and says: "Sometimes success makes you unpleasant, too successful is not good, success is beautiful but within certain doses, probably there were things inside me too that didn't go as they should but you have to take success as it is, both beautiful and ugly ». Then she goes back to talking about Valeria Marini, perhaps with a little regret: «In difficult moments that happen in life, the partner becomes essential and becomes the one who can support you and make you resist all adversities, I must say that in this Valeria it was wonderful. " Like her none ever. But who is Vittorio Cecchi Gori? Let's retrace his life, his loves, his career and his misadventures together.

Vittorio Cecchi Gori was born in Florence in 1942. Scion of one of the fine families of the Tuscan capital, son of the producer Mario, today he is 75 years old and lives on the sly. For most of his life he collaborated with his father in the family business, which dealt with cinematography. Vittorio has followed in his father's footsteps for years, producing some films that have come to win Oscars, such as "Il Postino", with Massimo Troisi, and the unforgettable "La vita è bella" with Roberto Benigni, in the role of the protagonist and of the director.

During the 80s and 90s Vittorio Cecchi Gori appeared several times on the pages of the Italian news, especially the pink one. His financial availability and his personality have in fact allowed him to weave relationships with some well-known VIPs, such as Rita Rusic and Valeria Marini. Thanks to the earnings obtained with the family production house, which became his after his father's death in 1993, Vittorio also managed to give vent to one of his passions: football. From 1993 to 2002 he was in fact president of Fiorentina, the soccer team of his city.

Vittorio Cecchi Gori's life in those years seemed perfect: everything was going well, with great successes for his production house. At the beginning of the 90s he also engaged in politics, first with the Popular Party, then with the Olive Tree. Towards the end of the decade, however, luck seems to abandon the Florentine entrepreneur, whose companies fall into bankruptcy. Due to his unclear role in the economic collapse of his empire, Vittorio is repeatedly accused of fraudulent bankruptcy and misappropriation of money, obtaining two different convictions, which bring him to prison for many years.

VITTORIO CECCHI GORI AND VALERIA MARINI
With his ex Valeria Marini, esteem and affection remained. Guest on Italian Saturday (7 October 2017) Valeriona recalled their story, amidst problems and some beautiful memories: from that story, the showgirl says she has learned to never turn her back. In fact, she had been close to him even in the judicial storm that had overwhelmed him. For her part, Cecchi Gori says of her: "Valeria has always been a brilliant woman".

VITTORIO CECCHI GORI AND RITA RUSIC
Two children (Vittoria and Mario), an 18-year marriage. They met in Milan thanks to Adriano Celentano, the early eighties. Rusic was a splendid girl of good hopes, he the man who represented "the world of dreams where everything could happen". He was to marry Maria Giovanna Elmi, but then he brought Rita to the altar. "I trusted my husband, who had been a tender man, to then turn into a frost monster," she said in an interview with the Courier dating back to July 2017. The request for separation comes from her, which explains the reasons: «In couples, breakages occur because one of the two no longer believes in that project. Vittorio chose his vices to the detriment of his family, of his work ». Today Rita Rusic is a film producer and director, who lives mainly in Miami. She left Italy because after the break with Vittorio everyone flew her face: "He made a void around me: he was a man of power". He says he does not receive any maintenance from the ex ("Only at the beginning a child allowance, which ended in 2007 with the excuse of his failure") and that he acted as both mother and father to his children.

VITTORIO CECCHI GORI ON THE WEINSTEIN CASE
Vittorio Cecchi Gori returned to make himself heard in an interview with Il Fatto newspaper released on October 19, speaking of Harvey Weinstein: "He has always been this way, very skilled, if you know about cinema, he is very filibuster". He tells of having met him several times, and of realizing immediately that he was a "fanfarone and a liar. Even incorrect, and two or three times I pinched him in concrete situations. " According to Cecchi Gori, a good producer "must think about making a good film, and not whether he likes a woman or not". However, "it's not just him, even if the fame of the cialtrone and adventurer has always had it. In Italy we would say whore. In his excellent job, he managed Hollywood intrallazzi great. But if you don't live there, you don't understand certain situations ». "Cinema is a big industry, and maybe this story must be treated with a different perspective – concludes Cecchi Gori – In this intertwining of large capitals the financial market has changed, there are different outlets and platforms, and in my opinion a business nature is not it must be excluded, managed by unscrupulous people ».

VITTORIO CECCHI TODAY
Today Vittorio Cecchi Gori has chosen to keep a low profile. The latest television interview dates back to March 12, 2017 on Sunday Live. He still has many legal problems to solve, on the other hand he looks thin and always tanned. Here he is in a recent photo together with Leonardo Pieraccioni, Carlo Conti and Giorgio Panariello: 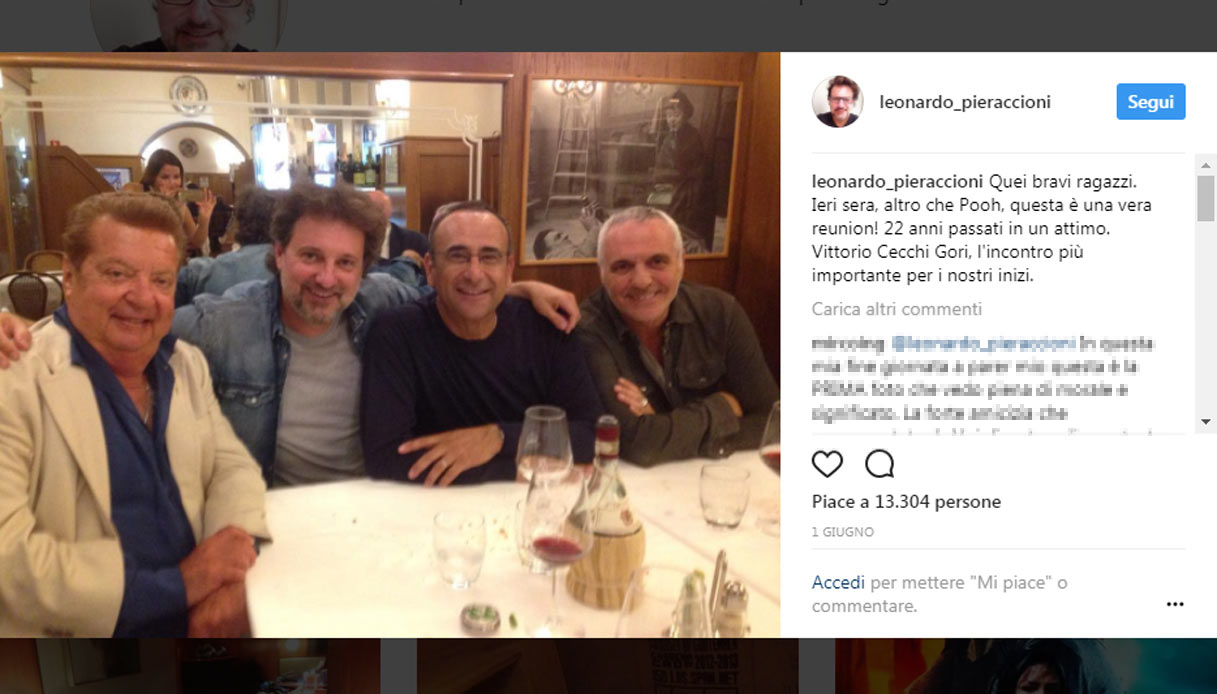 Those good guys. Last night, other than Pooh, this is a real reunion! 22 years passed in an instant. Vittorio Cecchi Gori, the most important meeting for our beginnings (June 1, 2017, Instagram Leonardo Pieraccioni)

Vittorio Cecchi Gori was caught yesterday by brain ischemia. Admitted to the Gemelli hospital in Rome in intensive care, he was kept in a pharmacological coma for several hours: his conditions are stable but serious. The ex-wife Rita Rusic and her son Mario – who immediately returned from Miami – managed to visit him: the actress said that at this moment he is awake and breathing aided by oxygen, but that in a few days he could leave the resuscitation department where he is currently hospitalized. Many people are worried about Cecchi Gori and who are currently sending messages of solidarity to the producer.

Giovanna Pirri
4634 posts
Previous Post
Fat burning foods that make you lose weight
Next Post
Friends, Tish transforms after the end of the program (and farewell to Alberto)