When and how to participate in the pillow battle in Milan 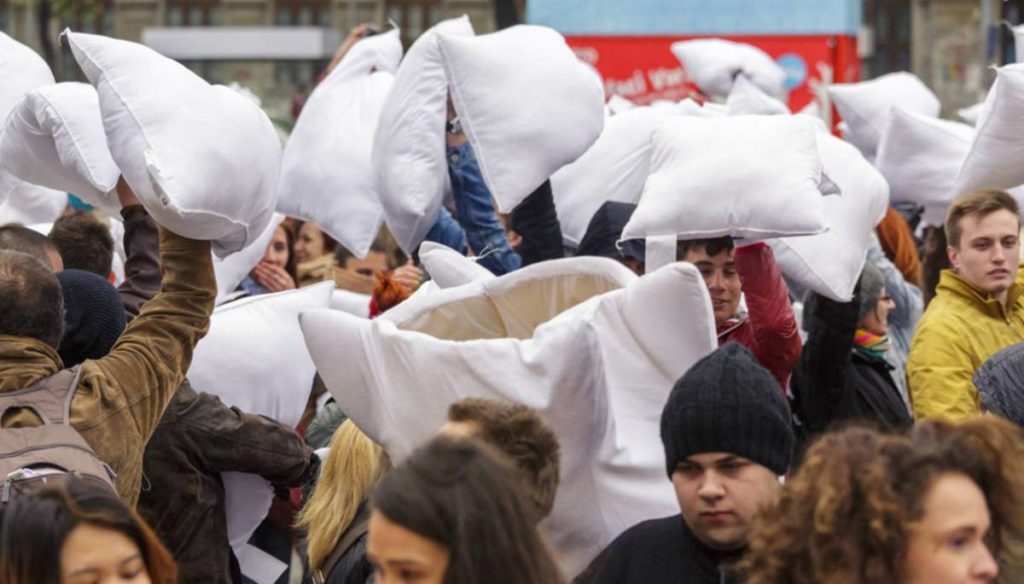 The battle of the pillows in Milan, also called pillowfight, is one of the most anticipated events of 2016: let's discover together all the curiosities about this unmissable city event in pajamas

The pillow fight has always been a nice way to have fun without getting hurt, but until recently the only stage of these epic battles was your bed. For some time, however, the tendency to bring pillowfights to the main world, European and Italian squares has spread: this is exactly what will happen on April 2, 2016, with the battle of pillows in Milan, which will take place strictly in pajamas.
Armed with a soft pillow, comfortable slippers and above all a great desire to have fun and party together, you can fight pillows in the beautiful setting of the streets and squares of the Lombard capital.

The appointment for this involving battle of pillows in Milan will be from around 2.30 pm on Saturday 2 April in Corso Sempione, practically under the Arco della Pace, and the start will be given a few minutes later. At 19, the final whistle will mark the end of the fighting and, as a sign of peace, we will all exchange a fantastic collective hug, to forget even for a moment the bad thoughts.
Pajamas against pajamas, pillow against pillow, and … feathers against asphalt? It is clear that whoever brings a duck or synthetic feather pillow will lose a little on the floor. So to avoid leaving them on the street and leaving the mark of your passage, it will be advisable to bring a bag to collect them, once the battle has come to an end.

In short, it is an original and fun initiative to spend a different afternoon with friends or family. The main rule is to have as much fun as I can with a cushion, obviously within the limits of respect for those who fight alongside or against us, and in respect of the surrounding city. Furthermore, if we combine the funny convenience of being able to go around the street in pajamas to having fun in a safe and above all soft way, we obtain as a result a different and original event, which is forbidden to miss.
Obviously, the pillow fight in Milan is free and open to all those who want to spend an afternoon in the company of so many people, to see new friends and friends born. From 0 to 100 years, there is not even an age limit, on the contrary: children will have a great time, as well as the elderly, who will take advantage of the opportunity to rediscover the desire to laugh and celebrate.