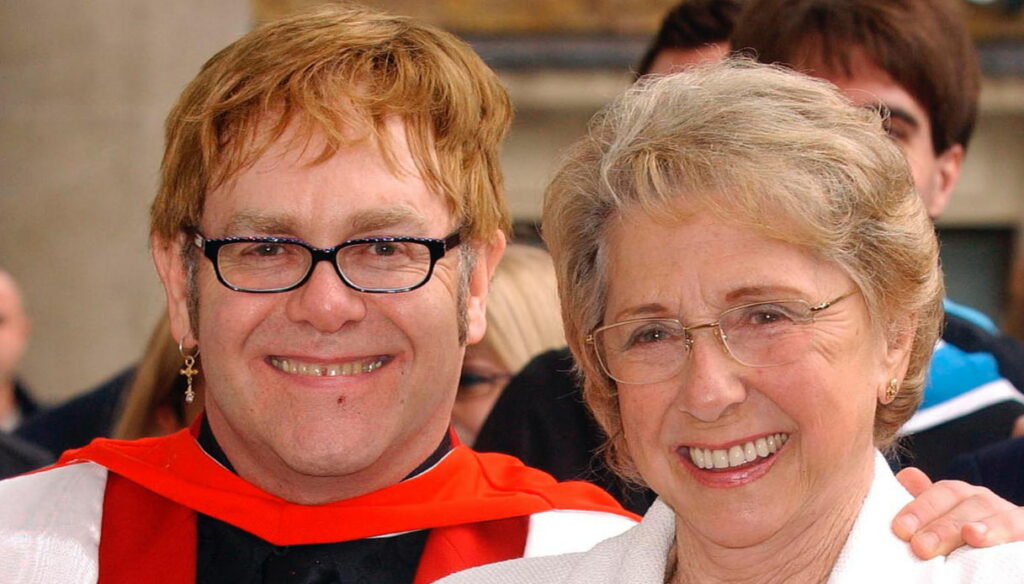 Sheila Eileen Harris is the mother of Elton John, a fundamental figure in the life and career of the singer

Sheila Eileen Harris is Elton John's mother, one of the most important people in the singer's life. Born in 1947, the artist was born in Pinner, United Kingdom, with the name of Reginald Kenneth Dwight. He is baptized in the home of his maternal grandparents where he lives with his parents: Stanley Dwight, a Royal Air Force pilot, and Sheila Eileen Harris.

The bad relationship with his father marks Elton's childhood which is anything but simple, but the singer always has his mother at his side. He is only 15 when he decides to start a career in the world of music and it is Sheila who supports him without reserve, going against her husband's advice. She, who collected records, nurtures and cultivates her son's love for music. So much so that years later Elton John will remember discovering the world of rock n 'roll thanks to the recordings of Elvis Presley and Bill Haley & His Comets that he listened to thanks to his mother.

At the age of three he began playing the piano thanks to his maternal grandmother and it was at that moment that all his talent came to light. When Sheila Eileen Harris hears him playing Winifred Atwell's The Skater's Waltz by ear, she is fully convinced of its potential and is now certain that it will become a star. Until he was eleven years old, Elton John continued to study piano, later he obtained a scholarship at the Royal Academy of Music in London, but his dream was to do rock'n'roll.

Once again his mother proves crucial, while the father is often absent. When he is at home, he will reveal some time later, violent quarrels often break out that will deeply mark the artist's introverted character. Elton witnesses his parents' divorce. Shortly after, Sheila marries another man, Fred Farebrother, who over the years will become a fundamental point of reference for John. The singer moves with his mother and stepfather in the new house and it is here that he makes his first compositions.

It will be Sheila who pushes him to work in a music store and perform as a pianist three times a week in the Northwood Hills Pub. The rest is history: the huge success of Elton John and his songs that have consecrated him as an immortal star in the world of music. In 2017, Sheila dies shortly after reconciling with John whom she had drifted away from for several years due to his bond with David Furnish. “Take a peaceful trip, mom – he writes on Facebook -. Thanks for everything. I will miss you infinitely ”.