Why does the hand of Fatima bring luck? 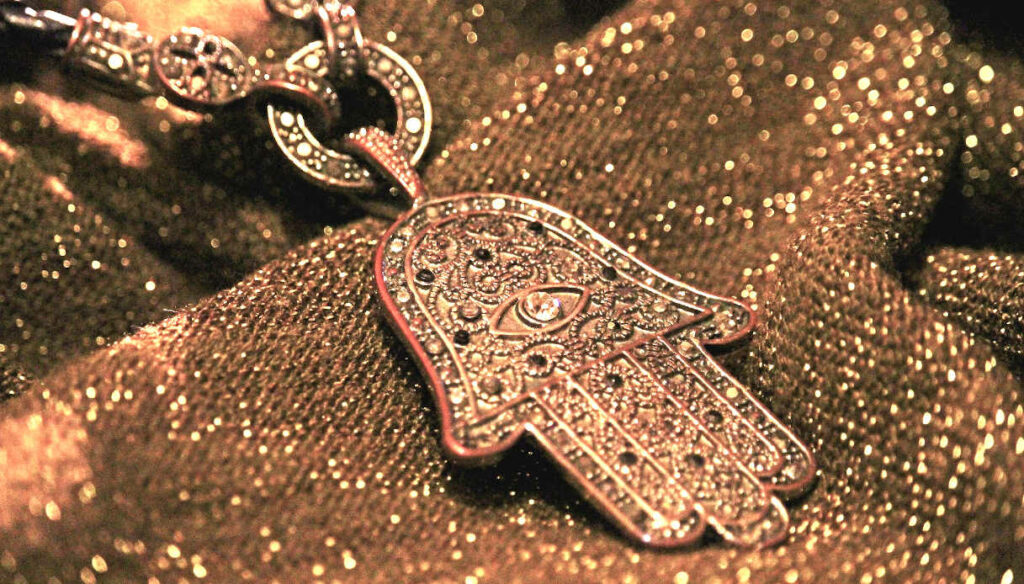 The hand of Fatima is a powerful amulet that protects the wearer from evil eye and malice: here is its story

The hand of Fatima is an ancient Middle Eastern talisman, one of the best known in the world. you’ve probably seen it on jewelry, tapestries, or clothes. It is universally recognized as a sign of protection and good luck by several religions as well. The hand of Fatima is a symbol dear to Muslims, in this article you will be able to discover its history and its meaning.

History and meaning of the hand of Fatima

The hand of Fatima also known as Hamsa or Khamsa is a palm-shaped amulet with five spread fingers, often decorated in various ways, the most frequent being with an open eye on the palm. Index and ring finger are the same length, attached to the middle finger, slightly longer. On the sides of the amulet there are two outward inclined thumbs of equal size. The Hamsa dates back to the times of ancient Mesopotamia, where it was used as a protective amulet from the evil eye and worn by women because it was believed to protect them during pregnancy.

The hand of Fatima is a lucky symbol that is found in many religions: Eastern Christians call it the hand of Mary in honor of the Virgin Mary, for the Jews it is the hand of Miriam as a tribute to the sister of Moses and Aaron , in Buddhism the five fingers of the Hamsa hand represent the five chakras, which align with the five senses to free the mind and body.
In all religions it is a talisman that people wear to protect themselves from evil and to attract abundance, fertility, luck, health. The hand of Fatima commemorates the last of the four daughters of the Prophet Muhammad and wife of Hazrat Ali. Fatima is described in legends as an exemplary mother and wife, which is why she is called “the shining one”.

Equipped, according to Islamic tradition, with the ability to work miracles, it is said that when she went to pray in the desert, flowers grew from the ground. She married, of her choice, to her father’s cousin, Ali, with whom she was madly in love. One day he came home with another woman, Fatima dipped her hand in the boiling water in shock, but she was so destroyed by the pain that she did not notice and did not feel any pain. Moved, Ali gave up having a concubine, as he was entitled to. For Islamic women the Hand of Fatima represents joy, love, patience and wealth.

Hand of Fatima with eye

The hand of Fatima is considered a good luck charm and a protection from the evil eye, negative energy carried by some people through looks full of evil. Hamsa is universally known for warding off evil, bringing positive energy and counteracting negative ones; the eye, in fact, is a protection for the wearer from the force of evil glances, a kind of “anti-evil eye”. An eye that sees everything and watches over the person wearing it, warning and protecting them from bad people.

Hand of Fatima that protects

Versatile both in appearance and in the material in which it is made, the Hamsa is used to make jewelry shapes that can be in metal, glass, wood. The most common are the hands of Fatima which appear as talismans on necklaces and bracelets, in the shape of pendants or inserted into the link of the chain itself. There are also earrings and rings. The hand of Fatima brings good luck and wards off evil depending on how it is worn. If the hand is facing down, the person is open to the goodness of the universe and receives luck and prosperity.

If the hand is facing up, usually decorated with the eye, it wards off the evil eye and protects the wearer from bad luck. In the Middle East it can be found represented on fabrics, embroideries, doors, paintings, furniture. However you wear it or put it on, it is important to remember that this amulet is more than just a jewel and should also be worn thinking about its origin and the cultures that hold it sacred. The hand of Fairy through the centuries protects the wearer, bring it too as an expression of your spirituality and thus attract hope and luck.

Giovanna Pirri
5756 posts
Previous Post
Sanremo Giovani, many former talents among the finalists: all the names
Next Post
Incense: what it is, what it is for and how to use it