Women and power: Letizia and the others at the United Nations. Photo 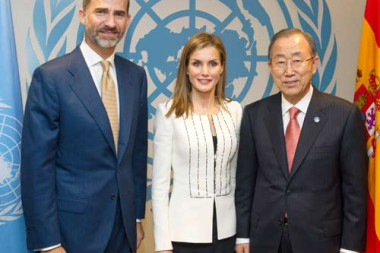 The occasion is one of the most delicate, complex due to the implications on the industrial side. It is no coincidence that United Nations Secretary-General Ban Ki-moon joined the oceanic crowd in New York. The massive demonstration introduced the conference on climate change strongly desired by the secretary. Men of power, in its various forms for forms of state and government, accompanied by companions, wives, faithful collaborators, followed one another during the Assembly's work.

Male figures flanked by women in charge of emerging countries or on the brink of economic and financial defeat and not just mere collaborators. The UN climate change conference showed us a policy in transformation. Infinitesimal variations, okay. Yet they too must be recorded and underlined for the exception to become the norm.

From Michelle Bachelet to Dilma Rousseff, the leading female figures have acquired visibility and centrality in numbers certainly not comparable to male colleagues. The consorts, from Letizia Ortiz to Michelle Obama and Maxima of Holland, certainly did not play the role of appearing alongside their husbands, for the use and consumption of image needs, preferring to expose themselves rather than slip into oblivion after sequences on command of smiles addressed to photographers and cameras.