Wonderful Letizia of Spain with the celestial dress. But an absence weighs heavily on the party

Letizia of Spain is a fairy tale with María Barragán’s wrap dress. But the absence of his daughter Leonor does not go unnoticed at the parade 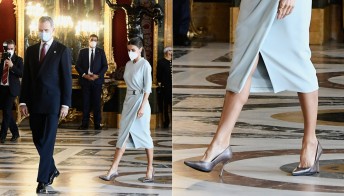 Letizia of Spain seduces with the slit at the National Day

Letizia of Spain participates in the celebration for the Spanish National Day by showing off a very elegant light blue wrap dress that is simply a marvel. But the Queen is troubled by an important absence, that of her eldest daughter Leonor who for the first time was not present at the parade.

Letizia of Spain at the National Day

With the exception of last year when the event was significantly reduced due to the pandemic, on 12 October Spain celebrates the National Day with the military parade attended by King Felipe with his wife Letizia and daughters Leonor and Sofia.

The ceremony has always been an opportunity for Reina Letizia to wear the most sumptuous looks. Since 2004, that is, since she was Felipe’s wife, every year she has chosen a new outfit by Varela. Only in 2020 did she break with tradition, presenting herself with a recycled dress as a sign of austerity. 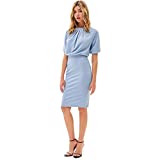 The heavenly dress by Letizia of Spain

Although this year she has decided to present herself with a new outfit, Letizia of Spain has adopted a new style. He said goodbye to the neo-romantic looks, tulle, ballerina skirts, lace and candy pink, typical of Varela, choosing a wonderful and sober light blue dress by María Barragán, a family-run and sustainable brand, specializing in wedding dresses and ready-to-wear.

The model chosen by Reina Letizia is a wallet, with an asymmetrical skirt, a discreet slit and a fabric belt with a double metal buckle that enhances Her Majesty’s wasp waist. The look plays between refinement and seduction thanks to the minimal but enveloping lines and that slit I see and do not see that it is really attractive.

Letizia combines the dress with a pair of pumps with a stiletto heel and a neutral color, by Magrit, like the coordinated clutch. Both already worn during the visit to the Goya exhibition. The only precious accessory of her look are the dangle earrings with aquamarine, made by Bulgari, and highlighted by the ultra-chic ponytail.

Alongside Letizia and Felipe, however, there is an important absence, that of the eldest daughter Leonor who is in a college in Wales. Her holidays begin on October 22, just in time to attend the delivery of the Princess of Asturias Award to be held a few days before her 16th birthday.

It is the first time that Leonor has not attended the National Day. Next to mom and dad, only her sister Sofia remained, who wore a graceful light-colored dress by Claudie Pierlot and black ballet flats with laces up to the ankles for the military parade. While Felipe is in full uniform as the court etiquette wants.

Giovanna Pirri
5759 posts
Previous Post
Eleonora Pedron, the pain never extinguished for the loss of her father
Next Post
Dayane Mello in crisis at La Fazenda: “I feel fragile, I’m a target”