Yeast: what it is, types, what it is used for and properties 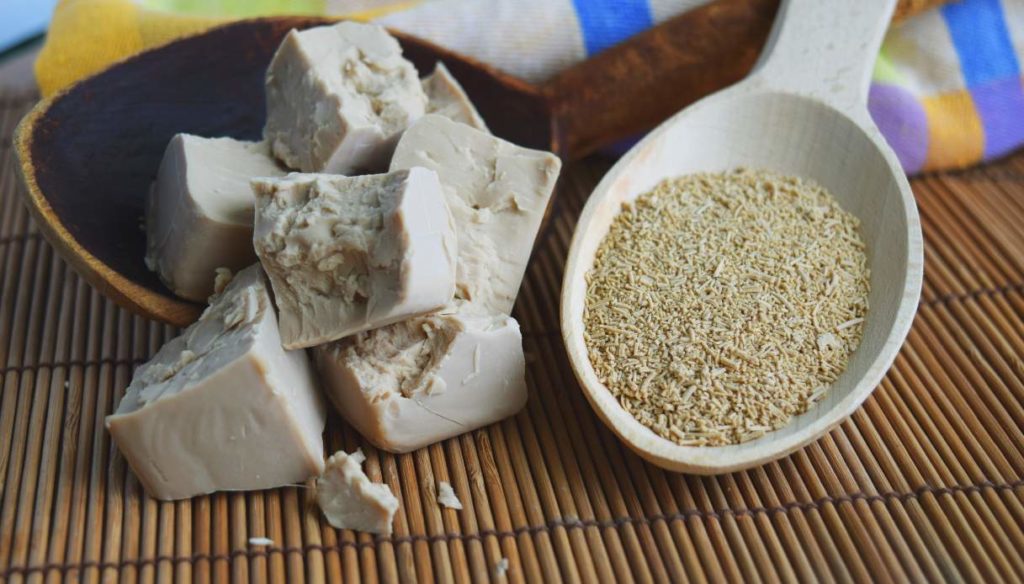 Yeasts are fermenting agents that allow bread, pizza, focaccia, cakes and other baked goods to rise

The term yeast is used to indicate a fermentation agent, used for thousands of years for the preparation of bread and alcoholic beverages, even before microorganisms and fermentation processes were known. Yeasts are microorganisms made up of small immobile cells that reproduce by budding from the mother cell or by splitting through sexual spores. Yeasts can grow in temperature ranges between 0 and 50 ° C, although the optimum temperature is between 30 and 37 ° C.

The food industry exploits the action of yeasts in fermentation processes: for this purpose, the most used are the Saccharomyces used for example in the production of beer, wine, alcohol and in bread making. Other yeasts are responsible for the deterioration of food during storage and cause, for example, superficial patinas on pickled foods, alterations in bread, grayish white spots on sausages, rancidity of milk and butter and numbness of beer.

To prepare bread, sandwiches, cakes and other baked goods, the doughs are added with brewer's yeast which ferments the sugars present in the flours obtained from cereals. The carbon dioxide produced during fermentation swells the dough making it soft and the alcohol is then lost by evaporation during cooking.

Brewer's yeast is produced almost exclusively from culture strains of Saccharomyces cerevisiae – the same yeasts that allow the alcoholic fermentation of beer – which are grown on a substrate usually made from sugar beet to which other nutrients are added to optimal development. Initially a basic yeast is obtained which then serves as an inoculum to prepare the basic yeast. The latter is then marketed fresh, in the form of loaves that can be stored in the refrigerator or freezer, or dried. Brewer's yeast to prepare bread has several advantages over other yeasts: in addition to being stored for a long time, it guarantees fast processing times as it has good vitality and is able to quickly ferment the sugars present in the flour.

Brewer's yeast is also an ingredient used in the formulation of food supplements recommended for intestinal well-being and for skin and hair problems. On the market there is also nutritional yeast in flakes, that is, dehydrated brewer's yeast without fermentation power, used raw to flavor foods as an alternative to grated cheese.

In addition to brewer's yeast, natural yeast, also known as sourdough or sourdough, is also used to prepare bread. Natural yeast is composed of a mixture of water and flour that is left in contact with the air so as to enrich itself with microorganisms present in the environment, including saccharomycetes. Alternatively, the mother yeast can derive from a portion of dough made previously. Generally this yeast is prepared at the moment but it is also found for sale, dried. Natural yeast, compared to brewer's yeast, has longer processing times but gives the bread a characteristic and more pleasant flavor and aroma, better digestibility and a more regular alveolation.

The preparation of pizza does not differ from that of bread: it is a mixture of flour and water, to which yeast is added and left to rest to allow the fermentation process to increase the volume of the dough, which becomes soft and more digestible. The yeasts used to make the pizza are therefore the same used to prepare the bread, i.e. brewer's yeast or natural yeast.

To prepare cakes, biscuits and other baked goods you can use brewer's yeast or natural yeast, just like bread and pizza. However, since brewer's yeast tends to leave a characteristic flavor that does not go well with sweet preparations, and since natural yeast is not easy to dose, often for cakes and biscuits it is preferred to resort to leavening agents with which you have these problems.

Raising agents are mixtures of substances that allow dough to rise by releasing gas, generally carbon dioxide. Usually these are combinations of sodium bicarbonate or ammonium with tartaric acid or potassium acid tartararate or salts of orthophosphoric acid, which are intended to neutralize the alkalinity of the salt. Often leavening powders also contain small portions of starch or flour and are used above all in the household and industrial sector to produce biscuits and cakes but also sandwich bread and other products.

How much yeast to use

To allow the doughs of bread, pizza and cakes to ferment correctly, it is not necessary to add large quantities of yeast. By using the correct doses of yeast it is in fact possible to obtain perfectly leavened products without perceiving the yeast flavor, which can happen especially with brewer's yeast or natural yeast, when excessive quantities are added. Here are the necessary percentages of yeast:

2-4% for white bread, sandwiches, pizza and focaccia
1-2% for bread with mixed flours
3-5% for cakes
up to 15% for pandoro and panettone

In the direct processing method, the yeast is added directly to the dough of flour, water and any other ingredients and the dough is left to ferment between 28 and 32 ° C. In the indirect method, it is added to a part of the dough and, after rising between 25 and 27 ° C, the remaining flour and water are used to obtain the final dough.