Yellow zone in (almost) all of Italy: what can be done from 26 April 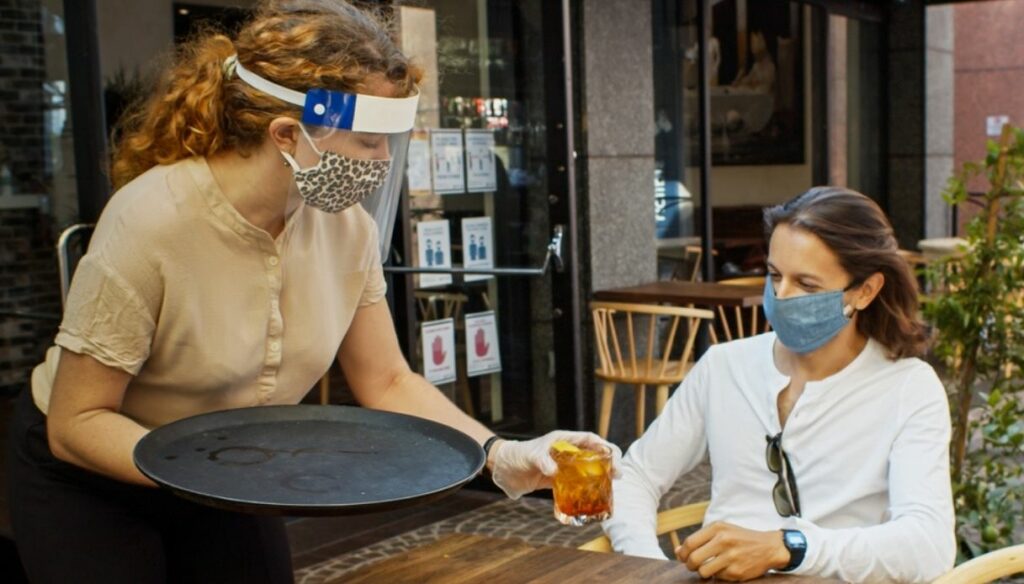 From 26 April, the return of the yellow zone in many regions of Italy: what can be done according to the provisions of the government, from shops to hairdressers

Italy will see the return of the Yellow Zone from April 26: there are many regions that will benefit from the reopening and the return of regional travel. What can be done in the Yellow Zone? The government has ordered a stop to the ban on travel, as well as reintroducing dinners for restaurants (but only outdoors). However, the curfew remains at 10pm.

The Regions that will pass into the Yellow Zone

Tomorrow April 26 is an almost completely official opening, in which 15 regions, according to the provisions of the ISS – Istituto Superiore di Sanità – will pass into the Yellow Zone. To fall into the category, Abruzzo, Campania, Emilia-Romagna, Friuli Venezia Giulia, Lazio, Liguria, Lombardy, Marche, Molise, Piedmont, Tuscany, Umbria, Veneto and the autonomous provinces of Trento and Bolzano.

Who stays in the Orange or Red Zone

Only Sardinia will remain in the Red Zone from 26 April, while Basilicata, Calabria, Puglia, Sicily and Valle d'Aosta will continue to be in the Orange Zone.

Regional movements in the Yellow Zone

Reopening of gyms and swimming pools

The possibility of outdoor sports returns, especially for team or contact games from 26 April. The reopening date of the swimming pools, on the other hand, has been set for May 15th, while the gyms will be officially reopened on June 1st. For now, the ban on using the changing rooms remains.

Shops and shopping centers in the Yellow Zone

For shopping centers, the security measures followed to date remain active. There is no reopening on weekends, at least until May 15th. As for the shops, they will remain open in the Yellow Zone on weekdays, while they will be closed on days before holidays and holidays.

Hairdressers in the Yellow Zone

There is no stop for hairdressers in the Yellow Zone, who will therefore be able to continue to carry out their work and follow the anti-Covid regulations so far recommended by the Istituto Superiore di Sanità.

Reopening of museums, cinemas and theaters

From April 26, the reopening of places of culture, such as museums, cinemas and theaters, is now certain, an aspect on which the population has greatly pressed over the months. Shows are therefore allowed in the Yellow Zone, but only outdoors. Indoors, however, maximum capacity limits must be established to prevent contagion.

In presence in schools and universities

As for kindergartens, elementary and middle schools, students will be able to return to attendance at 100%. On the other hand, the percentage of returning to high school was limited, set at 70%. University students will be able to sit exams or degree theses in person, but the government still advises caution and in any case to prefer distance learning.

Rules for visiting friends or relatives

The DPCM indicates that, inside the Yellow Zone, it will remain possible to visit friends or relatives between 5 and 22, but only once a day. According to the provisions, the ban will be completely removed from June 16, in which you can move freely and several times a day to visit friends and relatives.

Restaurants open for dinner, but outdoors

Among the great news of the Yellow Zone, the reopening of bars, restaurants, pubs and clubs for dinner. According to government regulations, however, dinner can only be consumed in premises that have an outdoor area. As for lunch, however, you can also eat indoors. There are no time limitations for hotels or accommodation facilities that have a restaurant.

The reopening of the spas and theme parks has been postponed: according to the new decree, they will continue to be closed until the beginning of July, when they could reopen to tourists. The same fate for fairs and congresses, as the reopening has for now been set for 1 July.

The curfew from 10pm to 5am now seems to be more than confirmed: the government showed no signs of abating. In any case, there are many parties that would like to propose an extension of the curfew, at least until 11pm. All that remains is to wait for further provisions to that effect, especially in anticipation of the summer season.

Lorenzo Gavazzi
2578 posts
Previous Post
Panicucci, the memory of the loss of his father: "There are no goodbyes for us"
Next Post
Belen Rodriguez, the exciting video in which she discovers she is expecting a baby girl
You must be logged in to post a comment.
Menu