The showgirl again in the eye of the hurricane, criticized for having used a very expensive cream despite complaining of being destitute 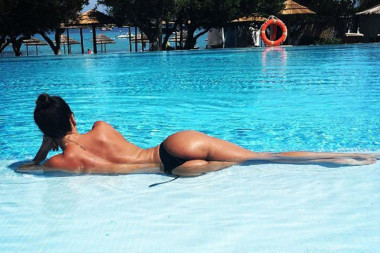 Claudia Galanti on vacation between luxury and sensuality

Claudia Galanti continues her holidays and is once again at the center of controversy. This time the web was unleashed by a photo that the showgirl posted on her seemingly innocent Instagram profile.

Galanti is seen doing a gold mask on her face with her children, Liam Elijah and Tal Harlow, next to them, also with their faces stained with the precious cream. The image immediately aroused the indignation of the network. Many followers violently criticized the showgirl for her inconsistent behavior. Some time ago she complained of being destitute, so much so that she had to participate in the Island of the Famous in order to feed her children. And now, in addition to spending the summer in exclusive locations, she uses luxury cosmetics, even wasting them.

The tone of the comments is acrimonious:

The children's mask can't be seen! He has nothing else to teach his children! I feel sad to see these things … I am far from bigoted, but there is a lot of paucity here.

First she goes to all the shows to be a victim, she says she has no money, that she went to the island to feed her children … and then? Luxury restaurants, holidays, shopping, gold masks for children?

In short, after Capri, even in Porto Cervo the controversies do not fade. Fortunately, someone defends poor Claudia by suggesting that she pay no attention to certain bad things. She seems to follow this suggestion and does not respond to provocations. Perhaps also because he had other concerns. In fact, he had lost his beloved dog, Hamlet, found after almost 6 hours.