Kate Middleton's baby bump keeps growing. In the eighth month of pregnancy, the Duchess of Cambridge is splendid with recycled looks and is preparing for childbirth 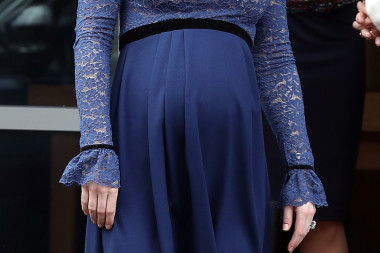 Kate Middleton in the eighth month of pregnancy

Kate Middleton is in the eighth month of pregnancy. The baby bump is growing more and more, in recent weeks it has exploded and she has ironized her curves. According to rumors reported by the Daily Mail, the Duchess of Cambridge is expected to give birth around April 23. If the royal baby met this deadline, it would be born on a highly significant day for Britain.

On April 23, in fact, St. George is celebrated, patron saint of England. If Kate were to give birth on that day, it will probably be declared a national holiday. In fact, since 2006, Parliament has intended to establish it as such, just as it happens for St. Patrick in Ireland.

Despite the big belly Lady Middleton continues to have an agenda full of commitments, no maternity leave for her. First she went to Oxford where she wore one of her usual bon-ton, cream-colored coats by JoJo Maman Bébé, which she could hardly keep closed, and then she visited the new headquarters of the Place2be foundation, of which she is godmother. On this occasion, she sported a dress with a lace bodice from her favorite maternity brand, Seraphine.

Both looks are recycled. The first one wore it for the first time in 2015 during Charlotte's sweet wait, instead we saw the dress just a month ago while Kate was on tour with William in Norway. If the first of February was almost wide, now it hardly contains the belly that has recently risen.

The birth will probably take place in the hospital and not in Kensington Palace, as revealed by the gynecologist who followed Lady Middleton during Charlotte's birth. The third royal baby should be female, even if the official is missing.