At the Cerecedo Awards Letizia of Spain dares with the shocking dress, signed Hugo Boss, a cascade of diamonds and a 1000 euro clutch. 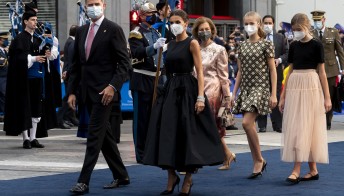 Letizia of Spain does not disappoint and at the gala for the Cerecedo Award she wears a dress by Hugo Boss, with mesh and fringes. A show of elegance and attraction.

At the presentation ceremony of the XXXVI edition of the Francisco Cerecedo Journalism Prize, Letizia of Spain follows her infallible style by sporting a classic black dress (SEE ALL HER LOOKS). If in 2020, in the midst of the pandemic, she preferred a minimal look by Armani, this year Reina presented herself with a dress that the magazine Hola! he called “shock”. 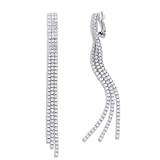 It is a midi, sheath dress, strictly black, signed Hugo Boss, the favorite designer of Her Majesty, with a wide-weave fishnet neckline and long thin fringes that fall on the arms. A detail, that of the bodice, that make the look of the Reina Letizia bold and sensual, despite its particular refinement. Definitely more aggressive than the total black outfit, created by The 2nd Skin Co, which he showed off during the gala for the Princess of Asturias Award.

The transgressive look of Donna Letizia, however, is not an absolute novelty. In fact, Felipe’s wife, also present at the ceremony, made her debut with the fishnet dress in 2019 at the delivery of the Mariano de Cavia awards. Then as now, Letizia di Spagna’s outfit caused a lot of discussion, so much so that the garment immediately went viral.

Letizia di Spagna, the dress of the stars

The dress chosen by Letizia is loved by stars all over the world, so much so that even Michelle Pfeifer in the film French exit appears exactly with that dress.

But net and fringes are on trend, Maxima from Holland wore looks similar to that of Felipe’s wife. And Penelope Cruz showed off a black velvet mini dress for a gala evening, accompanied by a mesh cape, crocheted.

Of course the Queen’s class is out of the question and the comments for her extraordinary outfit are simply enthusiastic. Letizia combines the fishnet sheath dress with her black Manolo Blahniks, also worn at the delivery of the Princess of Asturias Awards. And he broke the total black with the Nina Ricci clutch with gold details, from 2015. Cost? 1,000 euros.

Instead, as jewels shine, in the true sense of the word, the cascade earrings of black diamonds, by the Tous brand, and obviously her inseparable ring by Karen Hallam, a gift from her daughters Leonor and Sofia.

Letizia of Spain, make up and hair

The make-up of Reina Letizia focuses on the brightness of the face. Apricot blush to sculpt cheekbones, matching lipgloss and black pencil to deepen the look. The hair is worn loose and very smooth. Rare event, the Queen was photographed without a mask during dinner, for obvious reasons.

Letizia of Spain Felipe of Spain