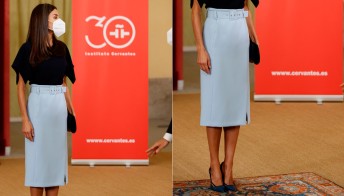 Letizia of Spain still dares with the skirt of power

Letizia of Spain wears for the fifth time the heavenly skirt of power, signed Hugo Boss, which she shares with some of the most elegant crowned heads in Europe, such as Mary of Denmark and Sofia of Sweden.

After the light blue dress with a mischievous slit worn for the National Day and after the green brocade skirt, a true work of art, Letizia di Spagna went on the safe side and chose a consolidated look with which she sends a precise message with which he affirms his pre-eminent role at the Court.

Longuette of power You can buy online a version similar to Letizia di Spagna’s skirt 7,70 EUR Buy on Amazon

Letizia of Spain with the skirt of power

The occasion is the annual council of the Cervantes Institute Foundation at the Royal Palace in Madrid with subsequent lunch. Therefore, Donna Letizia is in the role of hostess and for this reason she has decided to recover the light blue longuette with a coordinated fabric belt and sensual slit, signed by Hugo Boss, which contains an important symbolic meaning. In fact, the celestial indicates freshness, mediation capacity, peace, royalty, all essential qualities for a Queen worthy of this title. It is no coincidence that women who have a prominent public role often dress in blue, Queen Elizabeth first of all.

Letizia made her debut with Hugo Boss’s longuette on June 13, 2019 during the plenary session of the Royal Academy of Spain. Then he reused it a year ago, on October 29, 2020 during an audience at the Palazzo. To reappear again with this magical skirt on February 17 and May 19 2021, demonstrating the versatility of this garment that can be used indifferently both in spring and in mid-winter.

Letizia of Spain with the top of Hugo Boss

Particularly. the pencil skirt worn for the fifth time by Letizia is a much loved garment by the Princesses of half of Europe. Reina Letizia has always paired it with a dark blue shirt or jacket. For the business meeting at the Zarzuela Palace in Madrid she decided to renew her outfit by showing off the oversized navy top with asymmetrical sleeves, cape effect, by Hugo Boss, her favorite designer, Ibiaska model. Magrit’s décolletée and clutch, also rigorously recycled, complete the look. Even the earrings are a great classic in the Queen’s wardrobe, in fact they date back to 2008.

Letizia and Felipe, a couple in love

During the event with the Cervantes Institute, Donna Letizia was accompanied by her husband Felipe. The two exchanged a few words, getting dangerously close to each other, despite all eyes being on them. The couple is experiencing a moment of particular harmony, perhaps the separation of their eldest daughter, Leonor, who went to study in a college in Wales, has united them even more, making the moments of crisis of a few years ago a pale memory.

Giovanna Pirri
5650 posts
Previous Post
Tailor made beauty: products and brands tailor-made for you
Next Post
Eros Ramazzotti and Michelle Hunziker, lunch together for Aurora