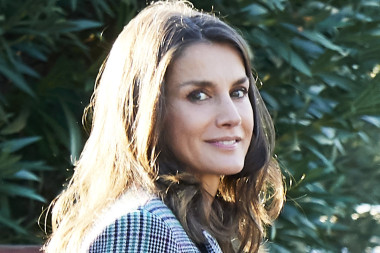 Letizia of Spain, casual look for the first day of school

Letizia di Spagna challenges conventions and accompanies her daughters Leonor and Sofia on their first day of school in pants and sneakers.

After the holidays, the Queen looks like a mother like any other. For this important event, she chooses a casual and comfortable look, as if she didn't want to overshadow the two girls. Leonor, the future Spanish Sovereign, is 14 years old, while her sister has 12. They wear the uniform of their school, the Santa Maria de los Rosales, and both have their hair in a ponytail. They seem almost twin and look very much like Mother Letizia.

Felipe's wife, on the other hand, wears a classic jacket that combines with black skinny trousers with zips on the ankles and lace-up shoes. An informal outfit, signed by Hugo Boss, which, as usual, worn by her turns into a refined and elegant outfit. Letizia smiles happily as she accompanies her daughters together with her husband, but is unable to hide the emotion. The beginning of school is always a very special moment, almost more for parents than for boys.

The royal family drives to the institute, driving dad Felipe. Then they get out of the car, the King precedes his daughters who follow him, while mother Letizia closes the row holding the girls' bags in her hands.

Certainly Letizia's style moves away from that chosen by other crowned heads to accompany their children at the beginning of the school year. Kate Middleton chose to present herself at the appointment with George and Charlotte wearing a dress by Michael Kors, while Charlene of Monaco accompanied the twins Jacques and Gabriella by showing off an elaborate patterned dress with transparent skirt and bare shoulders.

However, the three auguste mothers share the same feelings. In fact, they appeared proud of their babies and moved to see them start another school year.