Letizia of Spain, the best kept secret of her wardrobe: the shoe size 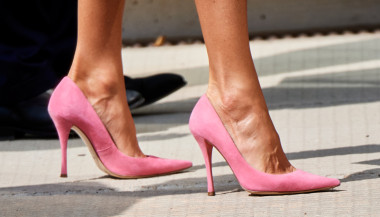 Letizia of Spain jealously guards the secrets of her wardrobe that have allowed her to win the title of the most elegant Royal of 2020, according to InStyle magazine, beating Kate Middleton, Rania of Jordan, considered by many to be her double, Mary of Denmark and Sofia of Sweden.

The modern, rock, minimal but also extremely feminine looks are wisely constructed based on the proportions and physique of Donna Letizia who at 48 is in splendid shape, so much so as to give a hard time to the crowned heads much younger than her.

Precisely the measures mean a lot in the definition of an outfit and these are protected by the utmost confidentiality. Even if Letizia's wardrobe experts do not miss anything, not even the size of her shoes, a fundamental accessory of her outfits.

Sara Escudero, author of the most up-to-date Instagram profile on the looks of the Queen of Spain, has discovered that Letizia wears 37, so she has a foot perfectly proportioned to her height, that is 1.68 meters. Felipe's wife loves the heels that she almost always wears for the most important occasions.

Magrit is one of her favorite brands when it comes to stilettos, but when she wants to add a glamorous touch to her clothes she wears pumps by Manolo Blahnik or Carolina Herrera.

Lately Letizia has also sported ultra-low shoes, Hugo Boss loafers, perfect with trousers, have now become must-haves and the same brand has recently shown off sophisticated ballet flats. For the rain, however, he preferred lace-up boots by Uterque. His over-the-knee boots are unforgettable. While in the summer he solves the issue of footwear with rope shoes, the Castaner at the head of all.

But not only the shoes make the monk. In fact, Letizia recently changed her style to adapt it even to the difficult moment we are going through. No excessive or too sophisticated garments, she favors working girl looks, trouser suits, longuette, like the light blue one by Hugo Boss, while the dresses are used only for formal occasions. And above all, no new or such items. Felipe's wife prefers to recycle what she already has in the closet and she doesn't mind repurposing almost identical outfits months later.

Another detail: it never shows that part of the body that no longer retains height, namely the knees. For two years she has said goodbye to mini-skirts, preferring longer hems or trousers. And these are the secrets of its success.