Loredana Bertè in a miniskirt: "Everyone free to be and love whoever they want"

Loredana Bertè posted a photo of her young and beautiful, in a miniskirt, her emancipatory uniform of the time. "Everyone must be free to dress and be whoever they want"

Loredana Bertè has always been one step ahead of everyone: the first rock woman, free and transgressive, the first to give a damn about judgments and moralists, the first to have homosexual friends of the heart, to surround herself with black musicians when still racism – above all in America – it was binding. The first to cry out to the world, through her music, her performances, that freedom, personal, artistic, sexual, comes before anything else.

And she still reiterates it today, after a 50 career, after the long feminist and social battles of those years, those in which she began to sing and perform, should have led to a better society. But the latest news stories, from Willy to Maria Paola Gaglione, show that there is still a long way to go.

And so Loredana posted various vintage photos in recent days, as evidence of her thoughts. In the first, published on 10 September, she is seen surrounded in the 70s by her black musicians and the comment:

In the eighties I had a band made up of all African American guys: Platinum Hook. Amazing American musicians! On a day off of the tour, I don't quite remember where we were, we arrived at a hotel.
I was already famous and Aida was with me. At the entrance, although I had always been a customer of theirs, they told us rudely that Aida and I could enter but the others could not because they were "NEGRI".
"If they don't go in, we don't go in either", I turned my heel and sent them to fuck and never went back.
40 years have passed and what has changed?
Five cowards against a little boy.
The life of a person today is worth as much as the likes of a post.
Every limit has been exceeded
Bullying, cowardice, racism and other horrendous things.
I would scream that they all make me sick, but instead, looking at the photo of that little boy with the huge eyes and that sweet smile, and thinking him dead, I just want to cry and never leave the house. Open your eyes, everyone. Because here we are degenerating beyond belief. There is a Nazi / Fascist air but it is denied. What happened to Willy is UNACCEPTABLE. And it has to be for all of you. You cannot tolerate statements or actions that are unconstitutional. THAT'S ENOUGH!

In the second one, published on September 16, she is seen, very young and beautiful, on a bicycle. And in a miniskirt, his "emancipatory uniform" of the time. And the comment:

When I went to high school I arrived with a miniskirt and 2 brushes in my pocket, when I went around the bike the cars collided because the drivers turned to look at me. At the time, the miniskirt was considered scandalous but I made it my FEMALE EMANCIPATION UNIFORM. Everyone is free to dress as they want, be who they believe and love who they choose to love. Thanks Mary Quant 💙

Instead we tell you: "Thank you, Loredana" 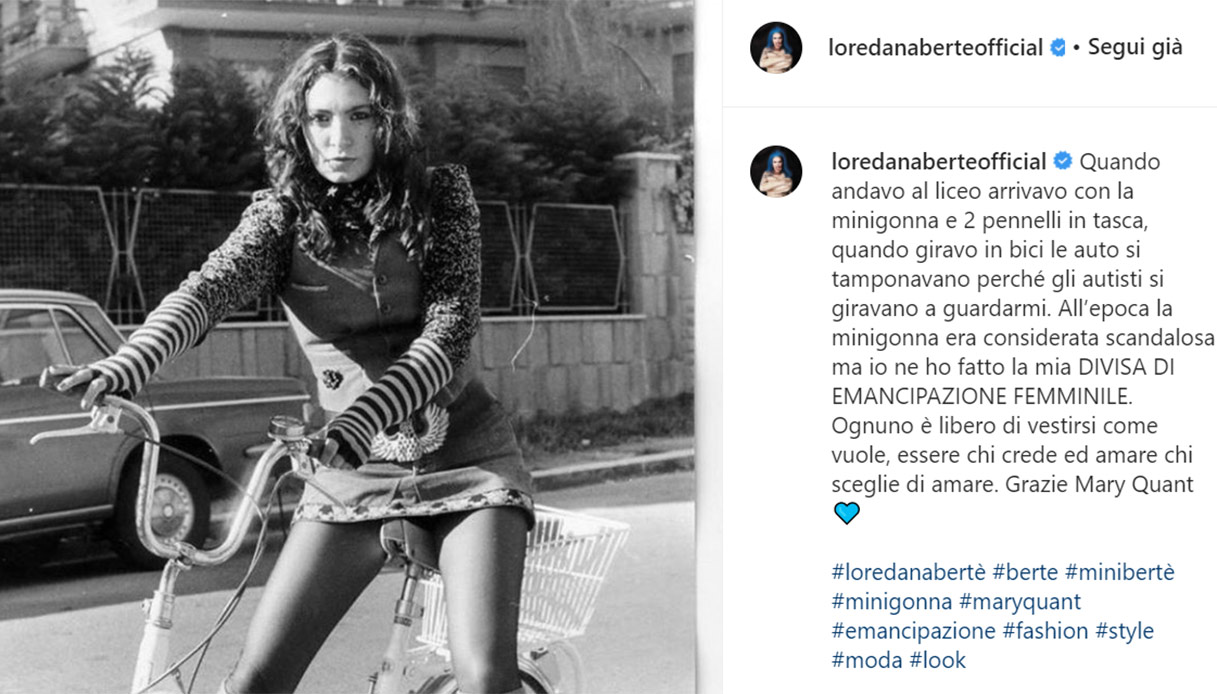