In seven months Meghan Markle spent a million dollars on her clothes. And his looks have not always been a success 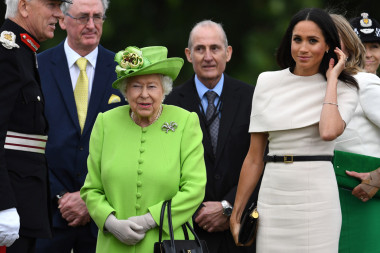 Meghan Markle, how much her looks cost

Meghan Markle apparently spent the stratospheric figure of one million dollars on her wardrobe only in the last 7 months.

The Daily Mail, who calculated how much he spent on each outfit, from the day of the engagement with Harry to the last public appearance at the Royal Ascot, took care of dealing with the Duchess of Sussex. Unfortunately for her, these figures have not always been well spent. An example above all, the dress by Oscar de la Renta, decidedly too large, worn at the wedding of Lady Diana's niece.

In these seven months at the English Court, Meghan has significantly changed her looks. The former actress first introduced more British brands, from Burberry to Stella McCartney, from Goat to Strathberry. His favorite signature for the moment remains Givenchy, which for another is led by an English designer, Clare Waight Keller. Meghan also likes Italian designers, such as P.A.R.O.S.H and Aquazzurra. His outfits have become increasingly sophisticated and bon ton, but also more expensive.

After all, the media impact of each of his releases has grown in a resounding way since his wedding with Harry. On the other hand, Meghan contributed a lot to the increase in the turnover in fashion. Just like for Kate Middleton, a "Meghan effect" has been created. Thus, for example, sales of the jeans model worn by Markle during the Invictus Games in Toronto increased by 640%.

The most expensive outfit for the moment remains that of the wedding, for which over 450 thousand euros have been spent. The first single commitment with the Queen cost her 15.664 euros. While the first official release with Harry when they were still "only" 1,800 euro engaged.

The next official event that sees Meghan as the protagonist is the tour in Ireland with Harry, which will take place on 10 and 11 July, immediately after Louis's baptism. How will Lady Markle dress? He will surely follow the advice of his sister-in-law Kate Middleton.

In Ireland the Sussex Dukes will visit Trinity College, attend the garden party organized by the British ambassador, meet the prime minister, Leo Varadkar, and the president, Michael Higgins, and attend a Gaelic football match, where Meghan can wear pants, as long as the hem is not too long.

The couple is particularly attached to Ireland, so much so that according to rumors after the wedding they spent a few days of vacation, a sort of honeymoon, in the exclusive castle of Ashford.