Meghan Markle breaks the dress code and dresses a dark suit by Givenchy at Trooping The Color, but is rejected. Neither Kate Middleton nor Lady Diana have ever dared so much 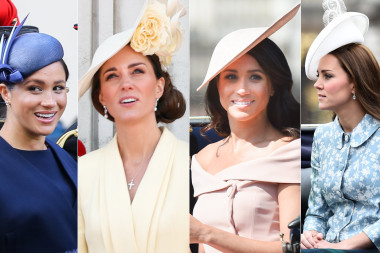 Meghan Markle returned to the public for Trooping The Color and chose a blue Givenchy outfit.

Harry's wife interrupted her maternity leave to attend celebrations in honor of Queen Elizabeth's institutional birthday. The curves of pregnancy, as is normal, are still evident. In fact, Archie was born just over a month ago, on May 6th.

Perhaps this is why Meghan favored a dark outfit. But in doing so, once again, he disregarded the unwritten dress code that requires a clear outfit for the occasion. Last year, Kate Middleton too had given birth to just over a month, but she had nevertheless worn a sky-blue dress.

The first time William's wife climbed the balcony of Buckingham Palace for the Trooping The Color was dressed in white. Over the years he has chosen dresses ranging from fuchsia to pale pink, from blue to pearl gray. And a couple of times he favored fantasies, but always in light tones, as tradition dictates.

The Queen has always adhered to this color code. The same goes for Camilla and before her Diana, who at most showed off a blue hat paired with a cream-colored jacket.

So once again Meghan wanted to challenge the Sovereign. But this time his look with a cape does not convince. The bon ton hat by Noel Stewart was worthless. Also last year he had found a way to circumvent the rules of the Court. In fact, although he dressed in pink, he showed his bare shoulders.

This time, however, Lady Markle neglected the protocol, but lost. Her outfit does not enhance her and neither the smiles or the third ring popped on the ring finger, probably a gift from Harry for the birth of the little Archie, were enough to forgive her for breaking the rules.

Among other things, while the Duchess of Sussex appeared serene, her husband on the contrary was rather overshadowed … Lack of sleep or couple disagreements?